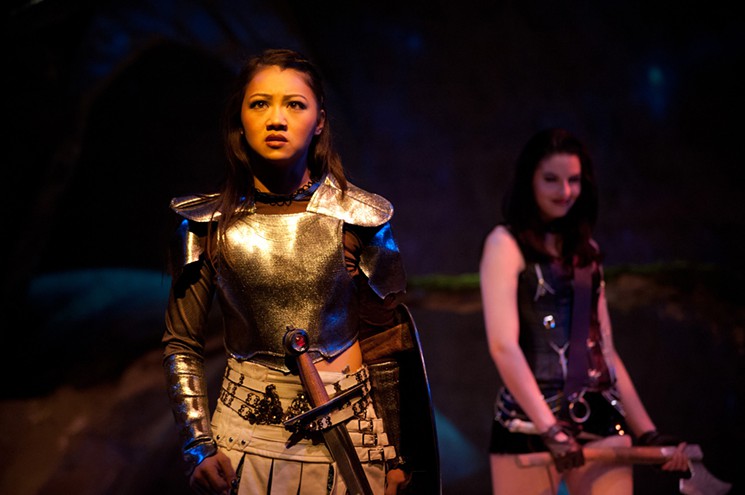 Review: She Kills Monsters a Fantastic Night of Fantasy at Aurora Fox

Geoffrey Kent is a jokester, a nationally known fight choreographer, a restless, funny and kinetic actor whose most memorable on-stage moment occurred a few years back in the farce Noises Off, when he hopped up a flight of stairs with his shoelaces tied together, tumbled headlong down, somersaulted across furniture and leapt to his feet completely unruffled — a man who never sits still, dresses his dog in ridiculous outfits and possesses a wickedly offbeat sense of humor. So you know it’s dangerous to give him control of a production that features major battles with unorthodox weapons, elves and fairies, puppets, monsters, cheerleaders doing a dance-off, costumes that look as if someone’s mother had run them up for a quick Halloween fix but nonetheless work very effectively, a funky set that a bunch of inventive high-schoolers might have rigged up in the garage, lots of ’90s pop music, monster-slaying girls and many, many swordfights. Qui Nguyen’s She Kills Monstersis a prolonged game of Dungeons & Dragons that mingles fantasy scenes with supposed real-life ones, and, unaccountably, Aurora Fox producer Charles Dean Packard entrusted Kent with the task of directing it. The result is a flowing, fast-moving, high-spirited evening of pure fun, with a few insightful and touching moments thrown in.

The story is set in 1995, a time “before Facebook, World of Warcraft, and Massive Multiplayer Online RPGs,” we’re told, when “there once existed simply a game.” Our protagonist, Agnes, lost her entire family in a car crash and is grieving in particular the death of her sister, Tilly, who died at fifteen and whom Agnes felt she’d never had a chance to really know. She discovers Tilly’s notes for a game and takes the folder to Dragon Master Chuck, who initiates her into Tilly’s world. Tilly appears, clad in silver armor and wielding an impressive sword. With her are two companions: sadistic, flesh-eating, leather-clad Lilith and wickedly elfin Kaliope. Many surprising adventures ensue.

Agnes has her own respectable grownup life. She’s moving in with Miles, even though he hasn’t yet asked her to marry him despite the five years they’ve been together. And she’s a teacher at the high school Tilly attended, which means she soon encounters the real, flesh-and-blood people on whom her sister based her fantasies. She’s now coming to understand a lot about her sister, and the way a lonely, geeky teenager who never felt she fit in at school was able to find strength, conquer her fears and come to terms with her sexuality in a world of supernatural enemies, magical allies and dangerous tasks. Agnes is able to speak with Tilly, to travel and fight beside her. But though she’s in her lost sister’s mind and privy to her deepest longings, she is constantly reminded that the Tilly she’s interacting with isn’t flesh and blood, but a Paladin, an avatar Tilly once created. Here, the script touches a deeper chord, though the overall tone stays light.

All of the performers are lively and appealing, and every one of them shows a great deal of stamina and endurance, clambering over obstacles, leaping from place to place, chasing, fleeing and fighting. Much of the time, Agnes plays straight man to the craziness around her, but Lilli Hokama makes the character lithe, gentle and grounded, and when she springs into action, she’s powerful. Jenna Moll Reyes is an impish little sister Tillie. Josh Archer is funny, goofy and disconcertingly graceful as an incompetent demon prince, Orcus, and Edwin Jordan makes his mark as hapless and eventually armless gamer Steve.

The evening is a silly, hyperkinetic good time, and a primer on what it means to tell your own fantastical story — because don’t we all have a few dragons to slay?

Best Actor in a Shakespeare Play