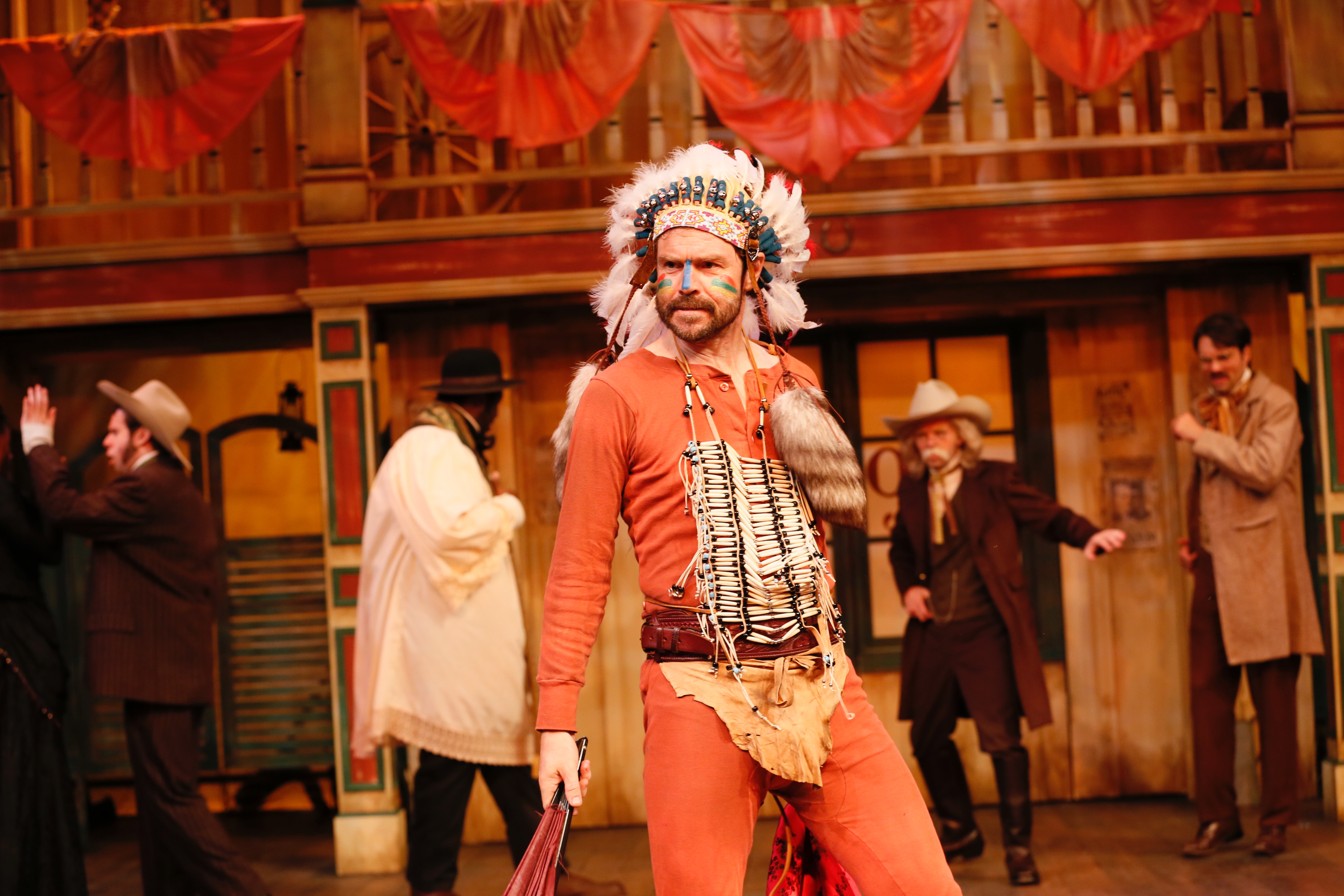 Theater review: ‘The Taming of the Shrew’ from Orlando Shakespeare Theater

Orlando Shakespeare Theater has set “The Taming of the Shrew” in the Wild West of the 1800s — and come up with a rootin’ tootin’ good time.

Director Jim Helsinger doesn’t aim for a realistic depiction of America’s frontier — this is the Wild West of old black-and-white movies and Warner Brothers cartoons. Crotchety servant Grumio huffs and sputters like a three-dimensional Yosemite Sam. When lovelorn Hortensio disguises himself as a Mexican troubadour, it’s like watching Speedy Gonzalez with fake (and recalcitrant) mustaches.

This winking, slapstick approach works wonders in cleaning up the two biggest problems with Shakespeare’s comedy, which dates from the late 16th century. For one, the word jokes in the play don’t necessarily resonate with speakers of modern English — but the exaggerated movements and pratfalls make the comedy work on a visual level.

More important, the heightened level of unreality softens a message that may not sit well with today’s audiences — the idea that a woman should obey her husband. In this production, Shakespeare’s battle of the sexes seems less a social commentary on a woman’s place in society and more an excuse for a saloon-bustin’ brawl and a rip-roarin’ sing-along.

Lead actors Geoffrey Kent and Deanna Gibson do their part, as well, to level the man vs. woman playing field. Shakes patrons know the earnest side of Kent — as Lucius in “Titus Andronicus” and Mercutio in “Romeo and Juliet” — so it’s a treat to see how funny he can be. Kent’s Petruchio seems more bemused than angry at his hellion of a bride, which makes Gibson’s growling and stomping and pummeling even funnier. Gibson has shown her comic chops before, in the Shakes’ “39 Steps,” but here she outdoes herself, quivering with what her Katherina calls “the anger in my heart.”

The battle of wills between Petruchio and Katherina, the “Shrew” of the play’s title, is at the center of the story. Katherina’s younger sister, Bianca, won’t be allowed to marry one of her many suitors until ill-tempered Kat finds a husband. Enter Petruchio, who wants Katherina’s dowry. He tries to make her the perfect wife, while various men pile up lies to win the fair Bianca’s hand.

The hodgepodge of accents employed by the cast obscures Shakespeare’s words from time to time, but the characters’ motivations are always evident.

It’s fitting that the first Shakespeare play of the theater’s 25th season shows off the depth of talent in the troupe — not only in the acting, but on the technical side. Mary Heffernan’s lighting lets Petruchio wax philosophical in the beautiful glow of a flickering campfire. Kat Conley’s clever scenic design neatly moves the action between Petruchio’s farmhouse and the town saloon. Denise R. Warner’s riotously checkered costumes emphasize that this is all for fun.

Feature: CSF’s 2014 season to include The Tempest
Scroll to top