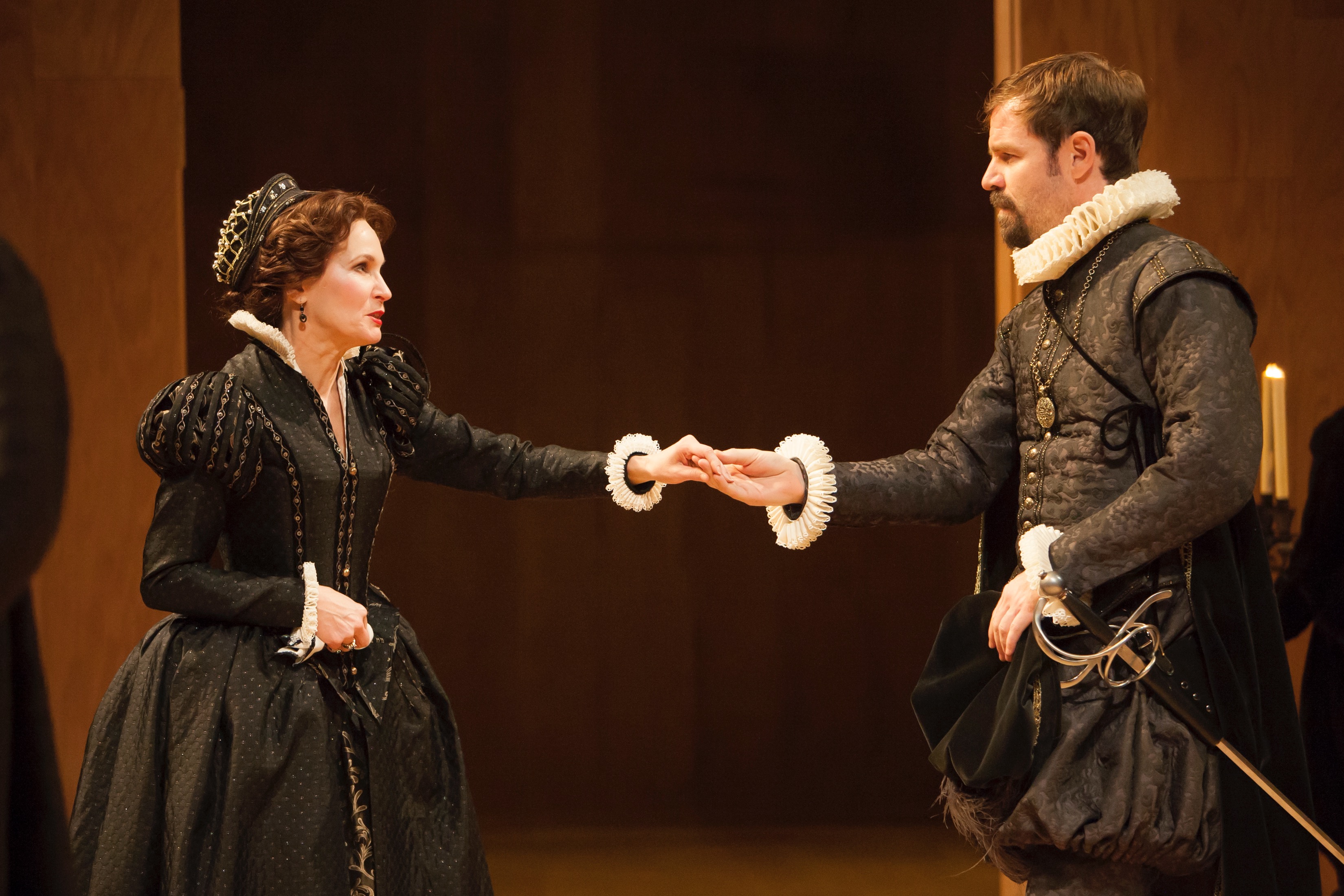 OK, that sentiment might be a bit rough for William Shakespeare’s “Romeo & Juliet.” Yet the Denver Center Theatre Company’s production comes to the Stage Theatre without its famous Verona veranda.

Oh sure, the “light through yonder window” still breaks as one of the world’s best-known young lovers, Romeo of the house of Montague, spies his new beloved. But the fair maiden no longer appears on the Capulets’ terrace.

Instead she stands atop a rectangular wooden bench, one we’ve seen earlier, one that has functioned as bench and as casket, one that promises that tragedy is never far off.

Indeed, this gorgeous yet spare production opens with two caskets, separated by long white sheers, that seemingly mirror each other. We are reminded by director Scott Wentworth and scenic design ace Michael Ganio that death comes to the house of Montague as it does to the house of Capulet. Centuries before the Crips and Bloods, Jets and Sharks and Hatfields and McCoys there were these pesky, feuding families whose violence begat more of the same.

Directed with a mature sense of the ribald and a rich grasp of the cruelty of a destiny wrought by hubris, “Romeo & Juliet” makes certain we never imagine love — not fate — has the leading role in this tale.

Not that we should ignore the headliners. Lenne Klingaman makes an at times luminous Denver Center debut as the young but decidedly headstrong Juliet. Charles Pasternak, so amusing as the peacockish king in last fall’s “The Three Musketeers,” takes the stage as Romeo.

Pasternak gives an intriguingly physical turn. His hand gestures have a fluid (teetering on florid) beauty, not unlike Romeo’s bold declarations of infatuation with Rosaline and then a love more precious and costly. Below Juliet’s window, he skirts the perimeter with a feline energy, a smitten kitten.

Each production of “Romeo & Juliet” should bring fresh insights into Shakespeare’s saga of romantic love and familial boneheadedness.

Philip Pleasants delivers the goods as an understandably aggravated and exhausted Prince Escalus. This Capulet/Montague grudge is disrupting the rule of law. It also has personal as well as civic consequences for the prince.

After a public scolding and for too brief a moment, Capulet (John G. Preston) shows a bit of restraint. Montague, played by Mike Hartman, never gets that far.

Capulet even advises Tybalt (Matthew Simpson), his spoiling-for-a-fight nephew, to chill. Once, however, Tybalt meets the sharp end of a sword wielded by an enraged, impulsive Romeo, more deaths are cast. Cooler heads will not prevail.

Impossibly deadpan and arch, Jeanne Paulsen offers some respite from the grim for a spell as Nurse. Her run-in with cheeky Mercutio (J. Todd Adams) teases the naughty with the carnal.

Still it’s scenic designer Ganio and director Wentworth who put the greatest mark on this visit to Verona. The production’s design and rhythms still call to me. Costume designer Christine Poddubiuk leaves an impression, too. The women’s gowns are exquisite, but she hasn’t cheated the fellas; their poofy garb suggests a Tudor influence.

The scene of Juliet lounging on that not-quite-balcony and Romeo wooing her from below finds each bent on outdoing the other’s confession of love. It’s played as a taste of sweet fun. As we know too well, their final parting will come as bitter sorrow for those adults who could not imagine a way to coexist.

Best Supporting Actor in a Comedy
Scroll to top