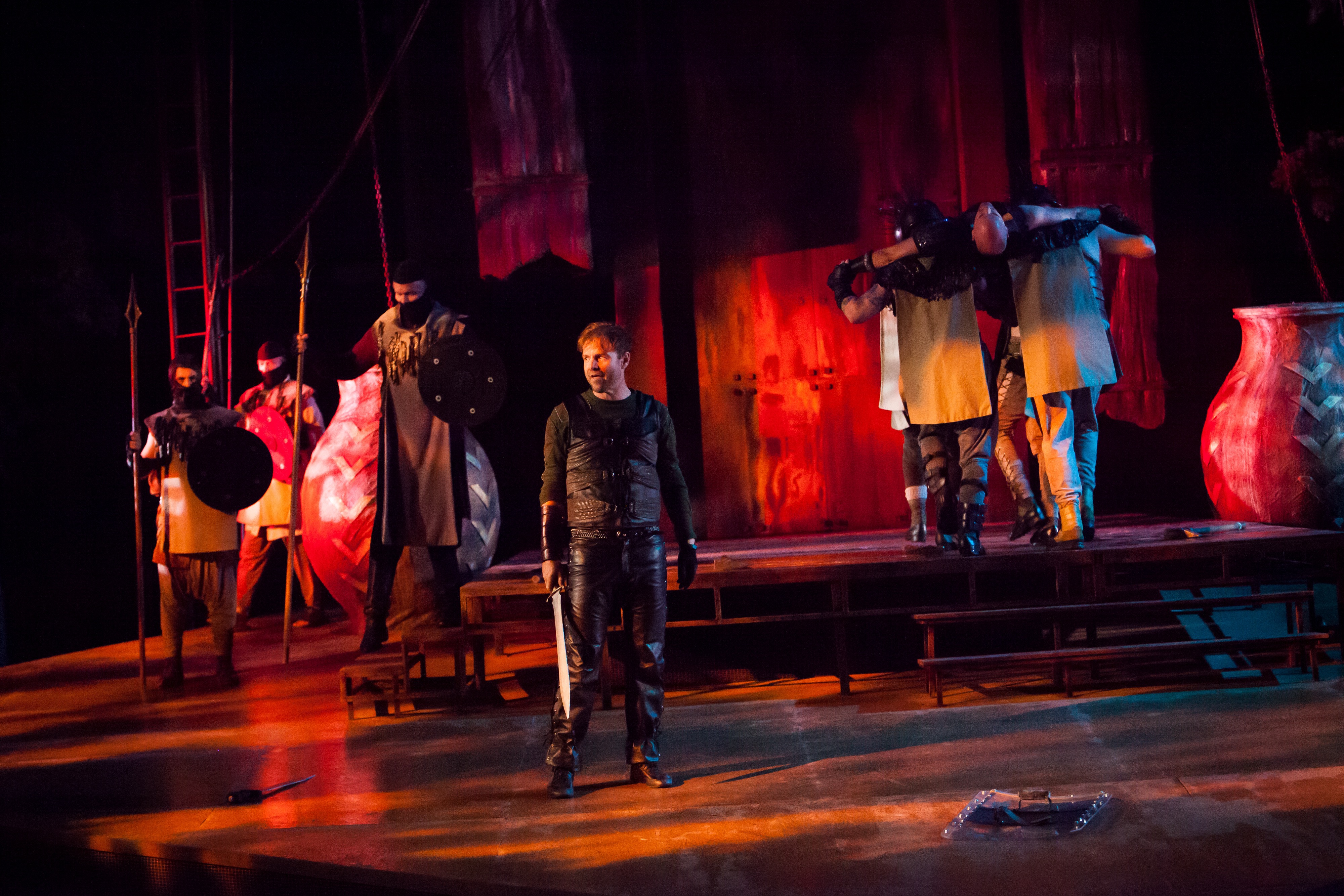 I didn’t want to see the Colorado Shakespeare Festival’s production of Troilus and Cressida. I had seen the play once before — and read it as a student — and vaguely remembered the plot, though almost no details. Still, I knew it was a problem play that sits somewhere between tragedy and history (some people would say comedy too, but I don’t see it), with a plot that feels oddly fractured and disappointing, and characters you don’t care much about — including Troilus and Cressida themselves. The play’s apparent meaning is summed up by the lecherous, disease-ridden Pandarus and the ugly-spirited, belligerent Fool, Thersites — and it’s pretty bleak.

There’s a sort of eat-your-spinach feeling about attending a production of a difficult play like this. You go to see it in part because it’s a change from the endlessly returning Hamlets and Midsummer Night’s Dreams, and in part in the same dutiful way you decide to read a ponderous collection of Kafka’s letters because you love his novels and fables. These may not be his best writing, you reason, but they provide insight into his art. So I took my seat in the pleasant outdoor Mary Rippon Theatre on opening night, grumbling, but also grateful for the opportunity to understand Shakespeare more deeply.

Surprise: The plot actually hangs together well enough in this show, though you never get really invested in the outcome; it begins in the middle of the Trojan War and ends with the fighting still unresolved. But director Carolyn Howarth has put together a lively production that moves forward to a martial beat, features some terrific swordplay and swarms with interestingly eccentric characters.

The title promises a love story, but this is love gone sour. In the early scenes between Troilus and Cressida, Cressida’s uncle Pandarus, who’s responsible for bringing them together, takes most of the focus. Howard Swain makes this pimp of a character both funny and disgusting. Cressida’s declaration of love when she’s finally alone with Troilus is so brief and also so rapidly spoken by Carolyn Holding that you don’t have time to figure out if it’s sincere. Which is important, because Cressida gets sent away from Troy to the Greek camp in a prisoner exchange, and, once there, soon betrays Troilus. Why? Is she just weak and vacillating, an opportunist incapable of controlling her lust for the Greek Diomedes, or a strong woman doing what she needs to do to survive in a hostile place? Shakespeare leaves her motives ambiguous, and Holding’s performance doesn’t enlighten you. Troilus, passionately played by Christopher Joel Onken, is more understandable: He’s a wildly-in-love young hothead.

But Troilus and Cressida aren’t really central; most of the action concerns the war. The great warriors of Greek myth are all present — Ajax, Agamemnon, Achilles, Ulysses — and sometimes seem wise and admirable, at other times squabbling and petty. The only fully heroic figure is the Trojan Hector, a formidable fighter yet also chivalrous, even at times unexpectedly gentle. Steven Cole Hughes’s performance in the role simply couldn’t be better. The Greek Achilles, called on to fight Hector, skulks in his tent with his lover, Patroclus, allowing Ajax, a cloth-headed ox, to take the field. When Achilles, enraged by the death of Patroclus, finally rouses himself to a stinging attack, he achieves victory over Hector through a vicious and cowardly trick. Geoffrey Kent, who also choreographed the fights, embodies interesting contradictions in this role: You sense the powerful fighter beneath the louche, sloppy appearance that Achilles first presents; later, you sympathize with his genuine agony at the death of Patroclus — it feels deeper than anything you’ve seen from Troilus or Cressida — and then within minutes you’re despising him for his sleazy tactics.

What the hell are all these people fighting for, anyway? Is beautiful Helen — here presented as a humorously oblivious and self-satisfied blonde by Lindsey Kyler — worth all the dying? Hector, for one, thinks not, and argues that she should be sent home: “Brother, she is not worth what she doth cost….” So it makes sense that Thersites (an excellent Sean Scrutchins) and slimy Pandarus seem to represent the play’s ultimate conclusions: War is dumb, dirty and dishonorable (a good motto for our own time); honor a slippery thing; love meaningless and sex nasty and disease-ridden.

Feature: Colorado Matters on Gender Swapping The Comedy of Errors
Scroll to top