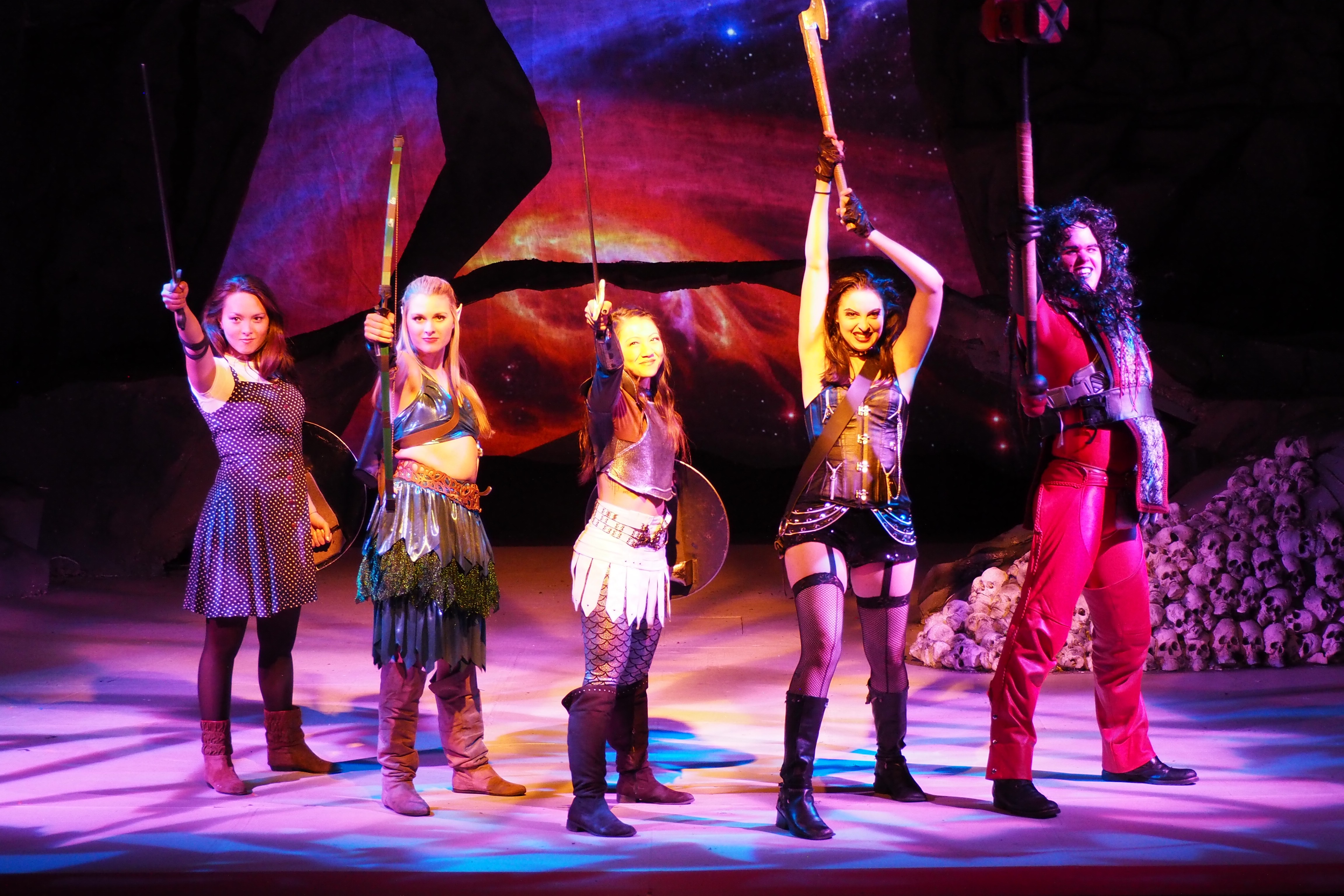 At the intermission of the Aurora Fox’s extraordinary production of  “She Kills Monsters,” I texted friends, urging them to see this play.

It’s droll, witty and geeky in the best sense of the word, full of magical realism in the form of villains and scenarios familiar to “Dungeons & Dragons” fans. But you don’t have to be a gamer to love this show, which makes its regional premiere here.

The backstory is told in a clever prologue: Aggressively ordinary Agnes (Lilli Hokama) was never close with her eccentric younger sister, Tilly (Jenna Moll Reyes), who dies in a car crash that also claims the girls’ parents.

Alone, Agnes starts packing up her sister’s room, preparing to move in with her somewhat unlikable boyfriend Miles (Anthony Bianco). Chastising herself for failing to be closer to Tilly, Agnes stumbles upon a “Dungeons & Dragons” scenario that Tilly wrote before her death.

What better way to understand Tilly than by playing the game she wrote? In the process, Agnes meets an affable dungeon master named Chuck (Jordan Doll) and tentatively embarks on an adventure that reveals Tilly as a celebrated D&D player — a powerful level-20 Paladin — who dominates her virtual world.

And what a rich world it is! There is bad-boy Orcus, Overlord of the Underworld (Josh Archer). There are menacing  Bugbears. There’s a malignant, gelatinous cube. There be dragons.

Worse, there are Mean Girls — Evil Gabbi (Kyra Lindsay) and Evil Tina (Ilasiea Gray) — with demonic powers as vicious as their cutting words. But are they a match for Tilly and her sword-wielding, role-playing allies — Kaliope (Katie Cross) and Lilith (Lisa Ann Gaylord)?

Initially, Agnes is aloof. She refuses to adopt a role-playing costume or name, so she becomes known as Agnes — Agnes the A—Hatted, after Kaliope and Lilith misunderstand an insult Tilly tosses at her unadventurous sister.

The story plunges so deeply into the game that it’s a little disconcerting when Agnes pulls back, as she must, into her life as a teacher, and Lilith becomes Lilly, a conflicted high school student, and The Beholder (Courtney Esser) morphs into Vera, a guidance counselor at Agnes’s school.

But the seismic shift from the game to the real world is right in line with the D&D universe, a place that tempts fans to linger as they learn more about one another’s stories with each roll of the dice.

That’s just as true for Agnes, who is learning things about her sister that she’d never imagined. Torn between the shock of discovery, grief at losing this complicated sister, and her own growing addiction to the game, Agnes spends more and more time with Chuck the dungeon master.

The D&D vocabulary, along with amusing 1990s pop-culture references, helps leaven the story. Boyfriend Miles assumes that Agnes is tangled in a kinky sex scene. How does Miles not know that being a D&D player is a better guarantee of virginity than wearing a purity ring?

As D&D players know, the story is driven by the dungeon master/narrator, which has some downsides in the form of the occasional clunky line. (If you disliked the “Star Wars” movies because of the scripts, you won’t like “She Kills Monsters.” Otherwise, you’ll overlook the clunkers.)

“She Kills Monsters” is a brilliant collaborative effort, and the ultimate date night for gamer couples — or gamers whose partners want a better grasp of the obsession.

Review: Cyrano Is Ahead by a Nose at Lone Tree Arts
Scroll to top