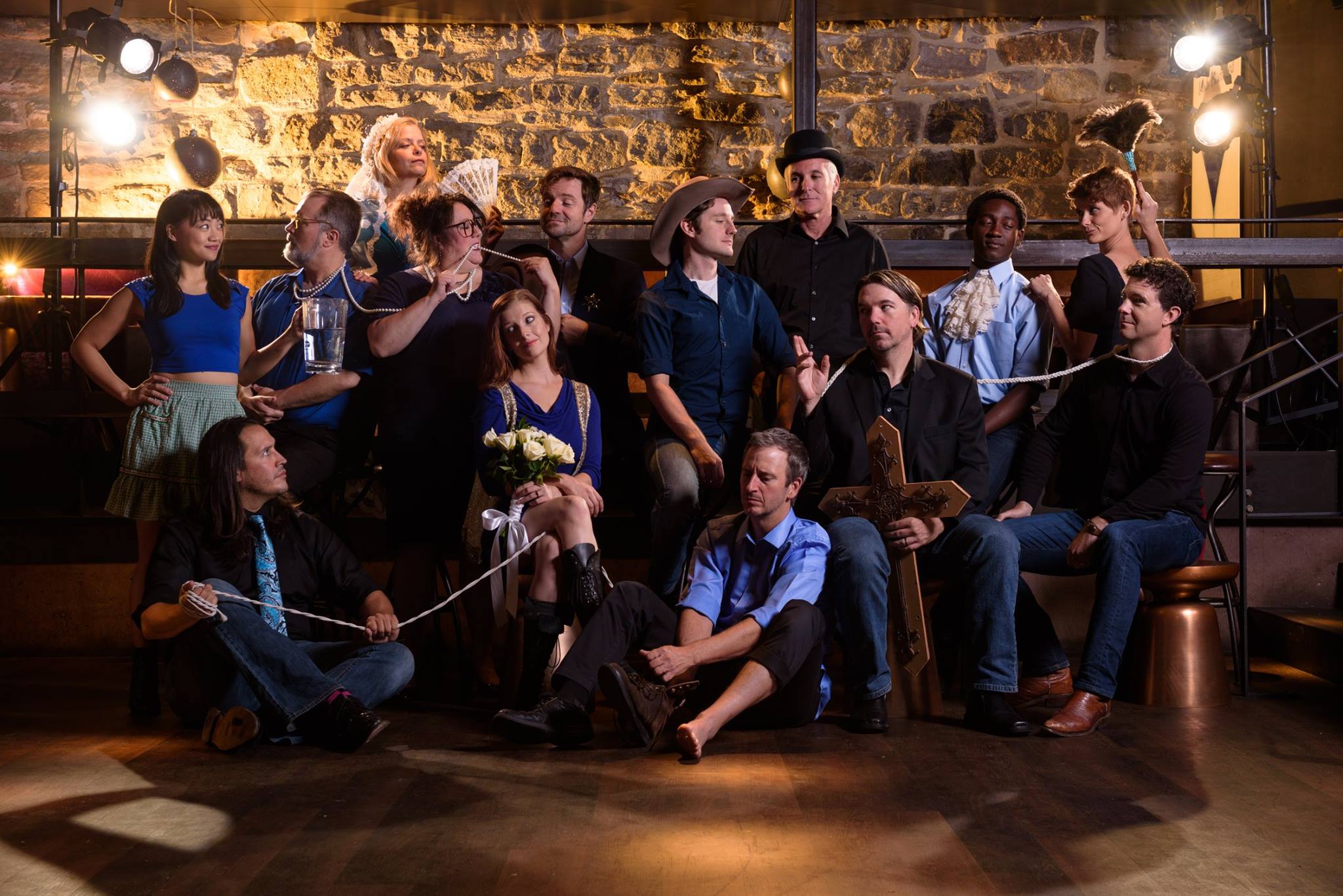 You might say the Arvada Center is leaping into the future by going back to the past.

The 40-year-old Arvada Center has announced huge changes to the way it programs its theatre seasons. Moving forward, the Arvada Center essentially will be presenting two simultaneous yet independent seasons – its trademark musicals on the mainstage under the ongoing leadership of longtime Artistic Director Rod A. Lansberry, and a new “salon series” of plays in its studio theatre crafted by Lynne Collins.

Executive Director Philip Sneed has hired Collins in the new position of Artistic Director of Plays. She will helm the new four-play salon season, which will be presented primarily in repertory, and largely by a core company of up to seven recurring actors.

“I think of it as sort of retro,” said Collins, known locally for her directing work with the Colorado Shakespeare Festival. Like many, Collins grew up on the American regional theatre movement that birthed the Denver Center and other foundational institutions in Seattle, Minneapolis and elsewhere. In their formative years, these theatres would hire “resident acting companies” that allowed as many as 25 actors to put down full-time roots in a given city for decades. The Arvada Center, too, grew around a core company of actors when it was founded in 1975. But a variety of economic, social and artistic factors have long since made permanent resident companies impractical.

The first company she hires will be tailored for the four plays she has chosen for 2016-17: Tartuffe, Bus Stop, The Drowning Girls and Waiting for Godot. Should the following season produce a wildly different type of fare, you will see a completely different slate of company actors. “This has a clear beginning and a clear end each and every year,” she said.

Meanwhile, the Arvada Center’s mainstage musical season kicks off Sept. 9 with Sister Act and continues with an original holiday production written by longtime Musical Director David Nehls titled  “I’ll Be Home for Christmas,” followed in the spring by Jesus Christ Superstar.  “Part of the thinking is to free up Rod so he can pursue new musicals for mainstage, which begins with the holiday show this year,” Collins said.

Added Lansberry: “The season is a blend of pieces that will truly show off the talent and artistry of the Arvada Center. It is especially exciting to premiere an original work over the holidays that features music by David Nehls.”

Here is how it all shakes down, in 10 easy bullet points.

How are you defining “company?” Collins is calling anyone a company member who is involved in at least two of her four studio (also called “black box”) plays each year.

Do you already know who some of your inaugural company members will be? Yes, Collins already has committed to three longtime Denver Center favorites: Geoffrey Kent, Sam Gregory and Josh Robinson, as well as Creede Repertory Theatre’s Emily Van Fleet. At least three other company members will be determined after general auditions April 24-25. Company members may serve multiple functions. Kent, for example, will act in Bus Stop and direct Waiting for Godot. Gregory will play Orgon in Tartuffe, Vladimir in Godot and a role to be determined in Bus Stop. “Company” also includes directors and designers. The creative company will include Shannon McKinney (Lighting Design), Brian Mallgrave (Scenic Design), Jason Ducat (Sound Design) and Clare Henkel (Costume Design).

Wait, Geoffrey Kent is an integral part of both the Denver Center and Colorado Shakespeare Festival families. And Sam Gregory will be taking over as the DCPA Theatre Company’s new Scrooge in its annual stagings of A Christmas Carol. Can these actors do it all? Absolutely, Collins says. “This is not about competition. This is about building an ecology of cooperation and mutual support that will benefit local theatres and the livelihoods of actors alike,” she said. “An actor who does the whole season here at the Arvada Center will be offered a 30-week employment contract. And next to the Denver Center, the Arvada Center is the best-paying gig in town. By creating a company, we are creating more work for more actors, designers and directors. That gives them negotiating power, and I just think that’s healthy. My goal is to try to work it out so that everyone can take advantage of other employment opportunities that come their way, because that benefits all of us. So yes, Sam will be doing A Christmas Carol, and Geoff will be doing an outside directing gig in the fall. We’re sharing talent. I was so excited when (DCPA Director of Education) Allison Watrous said yes to directing Bus Stop. She is integral to what happens at the Denver Center. That’s a great crossover.”

Gregory, for one, says he can’t wait to be an inaugural Arvada Center company member, and continue his relationship with the Denver Center at the same time. “I’m so (bleeping) excited about this,” he said, “… and you can quote me on that.”

So this is about building a stronger and more sustainable overall metro theatre ecology? That’s the idea. Many people gauge the overall health of any theatre city by the number of professional, union theatres it sustains that can create a living wage for a broad number of working artists. “It is my goal for this to be a place where a really strong community of local theatre artists can have a home,” Collins said. “Actors would love to be able to stay put. That’s then good for the Denver Center. It’s good for Curious. It’s good for all of us.

“There’s an old saying that the best place to build a gas station is next to another gas station. I really, truly believe that good theatre is good for all of us, and I am hoping that the Arvada Center Black Box becomes a real part of that ecology.”

But seven actors – that’s not enough to put on four plays, is it? No. More than a dozen roles will be made available to actors outside the core company. “That means more jobs for local actors,” Collins said. “There may be a project where I have to import somebody I can’t find here. But I hope not to.”

So for the inaugural season – those four plays sound, well … pretty old. It’s true: The first four titles average 120 years old. But Collins knows what she is doing – and whom she’s doing it for. Whereas most other companies are ever-scrambling to try and serve a wider and more diverse (and often elusive) group of potential new audiences, the Arvada Center remains mindful of its core demographic. Arvada is a city of 113,000 that is 82 percent white. The Arvada Center serves a much greater radius than just Arvada, but it is not trying to be all things to all people. This is a conservative season for a conservative audience base. “We don’t intend to chase all of the cool new titles the way Curious Theatre or the Boulder Ensemble Theatre Company does,” Collins said. “And partly that’s because they do that so well.” The exception would be The Drowning Girls, the 2008 story of three dead brides who gather evidence against the womanizing, murderous husband they shared in life. But the season is not an appeal to widely varying ethnic or social groups. And that, in turn, serves the repertory concept. That said, Collins said the 2016-17 lineup will present her actors with significant and divergent artistic challenges. “They are going to be asked to make some interesting transformations over the course of the season,” she said. “And that, along with paying the bills, will feed their souls a little bit.”

What is the artistic upside? “I grew up on regional theatres with resident ensembles that performed in true repertory,” Collins said. “That’s where artists really shine – when you have a chance to develop an artistic shorthand with a core group of people, and you give them a real artistic home.

“We were motivated to see if there is an economically viable way to create the kind of relationship with our audience that I think only a company can really do. When you see an actor in a tiny role in one play, and then starring in the next, then you begin to build a relationship with the audience.”

Another upside: Large plays – which is becoming more and more of an economic anomaly these days. “Playwrights today are writing small-cast plays – which is smart, because that’s the only way to get a new play produced these days,” Collins said. “We’re going to stay away from that wheelhouse, and instead look at shows that you can build around a larger number of actors who have real ensemble chops.”

So where is the Creede Repertory Theatre on your schedule? It’s not. Since 2010, Creede Repertory Theatre, located 250 miles southwest of Denver, has brought one of its summer season offerings down to Denver for a fall run at the Arvada Center, but that no longer fits under the new artistic blueprint. Look for Creede Rep to pop up at other metro theatres, like perhaps the Lone Tree Arts Center, in future seasons. “We haven’t given up the Front Range yet,” said Creede Rep’s Sarah

9 Other big changes are going on at the Arvada Center, right. Big? More like seismic. The Arvada Center is nearing the end a massive, three-year organizational transition from a city-run facility to a semi-independent nonprofit. This is a risky gambit, but one other city-run theatres such as the Aurora Fox will be eyeing closely. Theatres that are run by cities have the benefit of guaranteed funding in place that other non-profits can only dream of. But being a city-run facility comes with all kinds of bureaucracy and programmatic restrictions. Separating from the city should afford the Arvada Center creative staff more control over the activities, programs and theatrical productions offered there. But it will still receive about $4 million from the city each year – which is about the same as it gets now, Sneed said. So once that happens, it should be a win-win for all.

And who is Lynne Collins? She was first brought to Colorado by Sneed when he ran the Colorado Shakespeare Festival. Her credits there include Noises Off (2012), Romeo and Juliet (2011), Macbeth (2008) and All’s Well That Ends Well (2007). (Her proudest achievement: R&J, she says.) Since 1990, Collins has been an Affiliate Artist and resident director with the Foothill Theatre Company in Nevada City, Calif., where her directing credits have included Oleanna, The Glass Menagerie and Dancing at Lughnasa. Other theatres include The Western Stage in Salinas, Calif., Lake Tahoe Shakespeare Festival and the Sierra Shakespeare Festival. She steered a bilingual A Midsummer Night’s Dream, featuring actors from the Maxim Gorky Theatre in Vladivostok, Russia. She studied at the American Conservatory Theatre in San Francisco, HB Studio in New York and with Stella Adler. She holds an M.A. from San Francisco State University.

Best Performance by a Supporting Actor in a Shakespeare Play