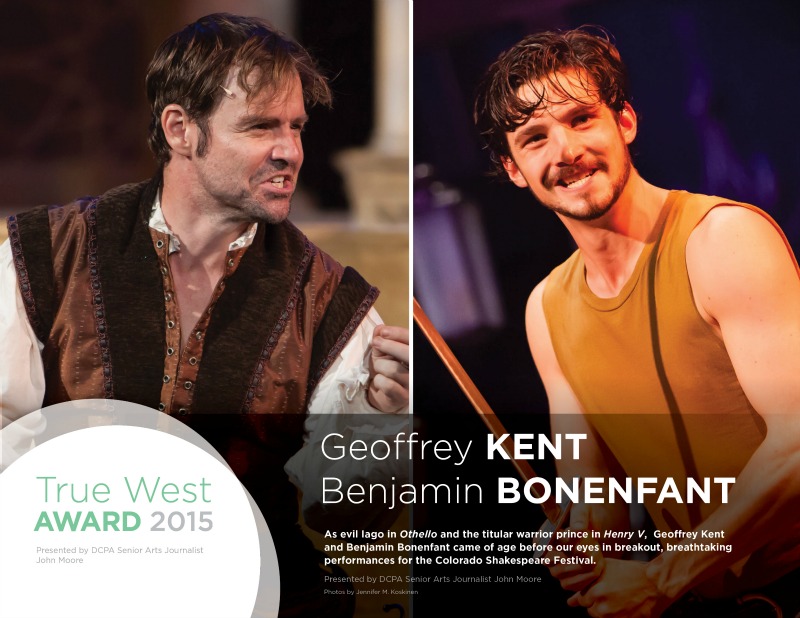 It’s a rare thing to be watching any live performance and just know that you are witnessing a moment of culmination and ascendancy. Last summer in Boulder, it happened twice.

For blood brothers Geoffrey Kent and Benjamin Bonenfant, the summer of 2015 was a rite of passage. As the evil Iago in Othello and the titular warrior king in Henry V, Kent and Bonenfant came of age before our eyes in breakout, breathtaking performances for the Colorado Shakespeare Festival.

These are no rookies. Kent has been acting, directing and staging fight choreography on stages all over Colorado and throughout the nation for nearly 20 years. In fact, he is tied with Sam Sandoe for the most current consecutive seasons with the Colorado Shakespeare Festival, with 13. Bonenfant is still a pup, and yet he won his first Colorado Theatre Guild Henry Award more than three years ago, and has worked for nearly every major theatre company from his hometown in Colorado Springs to Boulder.

But Kent forged his solid stage rep as a thief, having stolen too many shows to count with his sword and rapier wit – sometimes going so far as to whip a tiny dog out of his – pouch – for a shameless laugh. Bonenfant is the iconic Romeo who has left audiences swooning playing lovers and princes and brooding romantic heroes.

Then came the summer of 2015, when the two locked step and delivered the kind of transformational performances that have turned them into unequivocal leading men. Bonenfant was cast to play carousing King Henry V, who evolves from rowdy and rebellious teenager into a brilliant military leader who leads his outnumbered men into the breach and emerges with them as the surprise vanquishers in what many historians have come to think of an an unjust war. Bonenfant accepted the contradiction of his calling with a fervor and aplomb that resulted in a performance Westword reviewer Juliet Wittman called magnificent, enthralling and smart. “His Henry is so original, right, tough, supple and intelligent that the role becomes entirely new — and deserving of a place with the major interpretations of the past,” Wittman wrote.

“Playing Henry really launched Benjamin into another sphere of actor,” said his director, Carolyn Howarth. “He’s certainly a leading man now. He is both warrior and king. The truth is, as silly as it may sound, I’d follow him into a breach any day.”

Likewise, casting directors might not have thought of the likable Kent as the type of actor who could plumb the moral bottom-feeding depths the consummate villain Iago requires. But Othello director Lisa Wolpe and Colorado Shakes Artistic Director Timothy Orr smartly recognized that Kent’s most affable qualities are exactly what make a winning Iago only that much more venomous.

Wittman said Kent worked his lethal manipulation on poor Othello and his wife with crystal clarity and an infectious joy. “He operates with such charm that you find yourself shocked when you realize what he’s actually capable of,” Wittman wrote. “It’s like working on a suicide-prevention hotline, as volunteers in Seattle once did, and discovering that the nice, articulate man beside you is Ted Bundy.”

Orr thinks the secret to Kent’s success was simple: He left the dog at home.

“He just played it so straight and natural,” Orr said. “There was no winking; no mustache-twirling. It was not performative. He really dug down and found something legitimately honest and scary in that role.”

Orr, now in his third year leading Colorado Shakes, says he is forever indebted to Kent for what he has meant to the festival over the years. “He brings a wealth of experience and skill to our company, and he works like a demon,” Orr said. “He can direct or be a clown or play a leading role or serve as a fight director or help us to purchase weaponry. He is the full package. He’s a Swiss Army knife for the Colorado Shakespeare Festival.”

2015 was a very big year for both Bonenfant and Kent in Boulder and beyond. Bonenfant also appeared in the DCPA Theatre Company’s world premiere of Benediction; he played no less than Hamlet (yes, that Hamlet) in David Davalos’ new play Wittenberg for Colorado Shakes; and he starred in the Colorado Springs Fine Arts Center’s widely acclaimed Colorado premiere of 4000 Miles opposite Billie McBride. He is currently appearing in the DCPA Theatre Company’s A Christmas Carol through Dec. 27.

Kent played Don Pedro in Colorado Shakes’ Much Ado About Nothing and directed perhaps the surprise success of the year – the Aurora Fox’s poignant and playful She Kills Monsters, inspired by the fantasy game Dungeons and Dragons. He also helmed the Colorado Springs TheatreWorks’ current run of Born Yesterday. Kent is the Resident Fight Director for every show staged by the DCPA Theatre Company, and he recently played a lord in its recent production of As You Like It.

As for the future – these cats are out of the bag, and things likely will never be the same for either of them. Most evidently for Bonenfant, who has landed the plum role of Pip in the Oregon Shakespeare Festival’s highly anticipated world premiere of Great Expectations. directed by Penny Metropulos, who directed the DCPA Theatre Company’s You Can’t Take It With You in 2007. Bonenfant begins rehearsal in Ashland just two days after A Christmas Carol closes in Denver on Dec. 27, and he will be under contract there for almost all of 2016. While there, he also will be understudying his dream role in Hamlet.

Kent will appear at the Colorado Shakespeare Festival next summer as Achilles in Troilus and Cressida, and as Iacomo in Cymbeline. He also will direct The Comedy of Errors, with a gender-flipping twist: The four characters named Antipholus and Dromio (two each) will be played by women, and their “wives” will be played by men. “We’ve read it though, and all the jokes are funnier,” said Orr.

Review: There’s a Lot to Love About the DCTC’s As You Like It