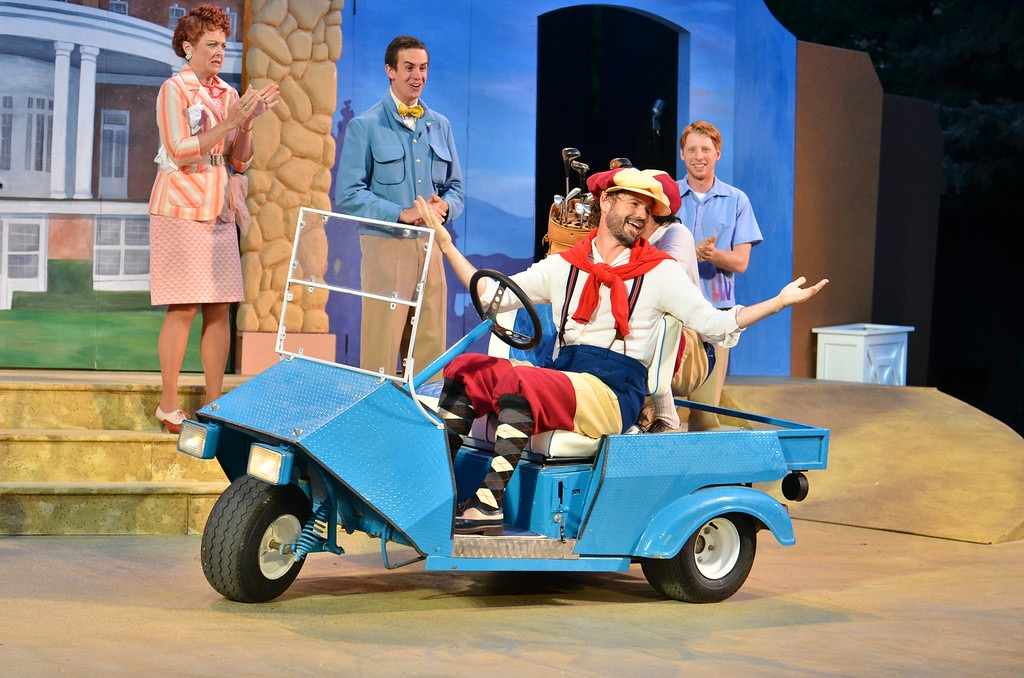 Theater review: ‘The Taming of the Shrew’ from Orlando Shakespeare Theater

The creative crew behind the Colorado Shakespeare Festival’s production of “The Merry Wives of Windsor” certainly knows how to make the most of a blank dramatic canvas.

Of all of the Bard of Avon’s comedies, “Wives” offers exceptionally little in the way of historical context. Written sometime in the final years of the 16th century, this lighthearted romp is one of Shakespeare’s most straightforward attempts at pure entertainment. It’s a rom-com of the Elizabethan age, veering from the heavy themes of politics, history and human happiness so carefully explored in the rest of the canon.

It features Sir John Falstaff — one of the bard’s most vivacious and vivid characters — as a central comic foil, and any profound lessons take a second fiddle to his sheer presence.

Historically, that seemingly shallow structure has made “Merry Wives” an easy target for creative interpretation, and the CSF’s production is no exception. Director Seth Panitch has shifted the action from the world of the Boar’s Head Tavern in 16th century London to New York in 1962. Here, Windsor is a trendy resort in the Catskills during they heyday of the Vegas-style lounge act. Shakespeare’s plots about infidelity and immorality unfold to the strains of 1960s pop hits; Kent Homchick’s scenic design includes golf carts and posters of the model Twiggy; the characters deliver Elizabethan oaths to Jan and Dean.

We first see Falstaff as a stand-up comedian, an utterly contemporary hack delivering groan-worthy one-liners before tapping the mic and asking, “Is this thing on?” Pistol and Nym, written as two of Falstaff’s followers, have been reimagined as a ventriloquist-dummy act played singly by Sammie Joe Kinnett. Slender, played by Ian Anderson, belts out a modified version of the Four Seasons’ ballad “Sherry” to woo Anne Page (Kyra Lindsey). Shannon McKinney’s lighting design and Jason Ducat’s sound offer the neon colors and radio-friendly tunes of Kennedy-era America.

Any such fundamental tweak to the setting and context of a Shakespeare play runs the risk of feeling lazy or hackneyed — there’s only so many times setting “Hamlet” in contemporary times can feel fresh and innovative. But thanks to the open-ended structure of the comedy itself and, more important, the energy and skill of a fine ensemble, this take on “Wives” works well.

The lynchpin here is, of course, Falstaff, the Elizabethan model for Bohemian excess and abandon. The show’s main subplots between suspicious husbands and wives depend to a large part on the character’s initial bid to win the affections of two married women, Mistress Ford and Mistress Page. Intent on winning access to the fortunes of the pair’s husbands, Falstaff writes identical love notes to both ladies, and the pratfalls and tricks follow from there.

Veteran television and stage actor Michael Winters takes up the demands of that role admirably. Some of the comedy’s funniest moments come in Winters’ delivery of Falstaff’s colorful musings about his own obesity and moral shortfalls.

“I have a kind of alacrity in sinking,” Winters declares with perfect timing and pitch after the titular wives play a trick and have the jolly barfly dumped into a soggy ditch.

The rest of the CSF ensemble offers similarly vibrant performances. As Mistress Ford and Mistress Page, Vanessa Morosco and Mare Trevethan never let the creative liberties of the staging take away from the pure poetry of the text. As their would-be cuckolded husbands, Peter Simon Hilton and Scott Bellot achieve a similar feat.

As the arrogant and blustering French Doctor Caius, Geoffrey Kent is a comedic highlight, delivering lines in an overstated accent worthy of Monty Python and drawing on his full range of skills as CSF’s resident fight coordinator during a duel featuring golf clubs and a bible. Kyra Lindsey and Joshua Archer see little stage time as Anne Page and Fenton, the young couple who serve as the romantic anchor of the show, but they succeed as one of the comedy’s anchors.

The performances help keep the show grounded at moments when the creative liberties come on a bit strong. The stream of ’60s pop tunes, the constant historical nods with references to “commie bastards” and beatniks, the mambo lessons, full-cast dance numbers and recitation of Abbott and Costello’s “Who’s On First” routine — it all can occasionally take on the feel of overkill.

Even so, Panitch and the talented crew keep the heart of the comedy in mind. Shakespeare might have passed on weighty questions about the human condition in “Wives,” but the CSF crew proves that the work continues to offer timeless comedy and insights about romance.