Geoffrey Kent as Don Pedro and Vanessa Morosco as Beatrice in the Colorado Shakespeare Festival production of Much Ado About Nothing. 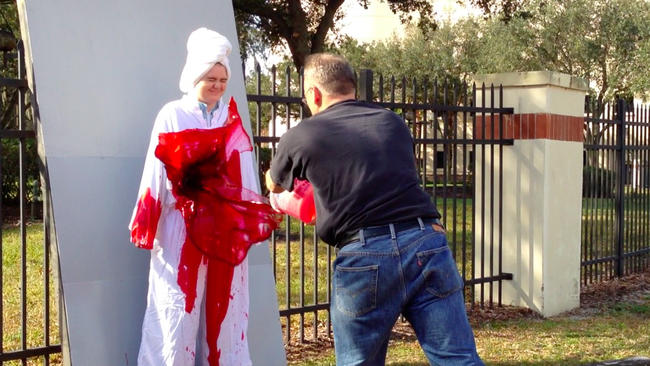 Orlando Shakespeare Theater’s ‘Titus Andronicus’ will be awash in blood

When Orlando Shakespeare Theater opens “Titus Andronicus” on Friday, March 29, the stage will be awash in red.

Shakespeare’s grim tale of the damaging — and frequently fatal — effects of revenge is a mix of violence and poetic writing. The Shakes bills it as the “‘Pulp Fiction’ of the Elizabethan Age.”

Artistic director Jim Helsinger evokes a slasher film, calling it “the ‘Friday the 13th’ of 1598.”

Although during Shakespeare’s lifetime it was his most-performed play, “Titus Andronicus” is staged much less frequently today. The gory story might make theater companies squeamish — but not Helsinger.

“When I first mentioned it, everyone seemed to shy away from the blood,” Helsinger says. “I was hearing, ‘Will we use red strings? Red ribbons? How will you avoid the blood?'”

But Helsinger had just the opposite approach in mind.

“I wanted to walk into it — to wade into it — and not walk away,” says Helsinger, who is directing the play for the first time. To him, the blood is vital to making the audience feel the emotional depths of the dark play.

“All blood on stage is symbolic, of course,” he says. “But at the same time it’s visceral. We connect to it. We’ve seen our own. It’s our life force.”

That life force drains from most of the story’s characters as an unlucky 13 die as the story plays out.

At an early read-through, Helsinger addresses his actors, sitting around a table in front of “blood”-spattered place cards: “Raise your hands if you die in this play.”

Nearly every arm shoots into the air.

Real blood has different types; stage blood has recipes. A laundry-detergent-based blood is preferred because it’s easier to clean up — but can be unpleasant if it gets into an actor’s mouth or eyes. One mix calls for just plain water and dye, but other ingredients could include peanut butter (for thickening) and cotton (to simulate brain matter).

The most important ingredient, of course, is red food coloring.

“We’re buying it by the gallon,” Helsinger says.

The creative team already has been carrying out blood tests — the sort that don’t involve nurses and needles.

“We were throwing buckets of blood at each other,” says Geoffrey Kent, the show’s fight director.

To determine what looked good on stage, the crew experimented with spray paint, rigged up their own sprayers and even toyed with some artistic movements with paintbrushes.

They quickly learned how aggressive they could be. “The first time I threw it, it bounced way back and I got in on me,” Helsinger says.

One trick of the trade: A hidden carbon-dioxide cartridge that triggers an explosion of blood — especially useful when someone’s head is blown off.

“It’s magic, it’s the art of misdirection,” says Kent, president of the Society of American Fight Directors. “I’ve got to chop a hand off in plain sight. The audience knows I didn’t really do it — but for one split second they have to believe it.”

The story of “Titus Andronicus” at first glance might seem over the top to today’s audiences. Titus, a general in the Roman army, returns from war with Tamora, the enemy queen, as his prisoner. Following the rules of war, he sacrifices her eldest son to avenge his own sons who died in combat. She then vows revenge, and one brutal act leads to another: Dismemberment, rape, murder. At one point, a character’s tongue is cut out of her mouth.

Helsinger says the story isn’t as farfetched as it may sound.

The deadly cycle of revenge is timeless, he says, pointing to conflicts in the Middle East and Northern Ireland as examples.

The Shakes’ production, which opens March 29, will have a contemporary atmosphere with guns fueling the violence to a speed-metal soundtrack. Yes, metal.

“I’ve been listening to [metal music] in the car,” Helsinger says. “But I can only take so much.”

“Ultimately the play is about our reaction to violence: ‘When will this dreadful horror ever end?'” he says. “We come to the theater to ask those questions.”

Everyone knows blood is thicker than water. It’s also more expensive — even when it’s fake.

With 38 scheduled performances, plus rehearsals, the production will use about 115 gallons of stage blood. Tongue in cheek, the Shakes held an online “blood drive” to raise $5,000 toward the expense.

The theater met its goal — perhaps because of the perks. Each donor who gave $100 received two drinks at the theater’s Harriett’s Bar. They sure don’t offer that incentive at the Red Cross Bloodmobile.

Lady “Out, damn spot” Macbeth would be beside herself.

Certain costumes have to remain stain-free, as well — complicating Kent’s job. “Some people can’t get blood on them,” he says. “We have it carefully orchestrated — no blood on that dress!”

Then there are the artistic challenges. With so much death, will the audience become numb to the killings?

“There’s a point where you can’t subject the audience to more realism,” Kent says. “How do you keep topping yourself?”

Helsinger plans to make the murders less real and more theatrical as the play progresses. He found inspiration in filming techniques used by master thriller director Alfred Hitchcock: The aftermath of a violent act is more visually shocking than the violence itself. So the spatters will become more and more artistic; rolls of butcher paper will become canvases for the gore.

The final hurdle may be the audience itself — if patrons arrive expecting a quiet night at the theater, but then find themselves listening to Marilyn Manson music while watching someone’s brains go splat.

“There are people who are going to be offended by any production of ‘Titus Andronicus’ we do, no matter how we do it,” Helsinger says. “So let’s do the production we want. … We are doing a bloody play as bloodily as we can.”

Best Supporting Actor in a Comedy

Review: The cast of Midsummer features no shortage of standouts
Scroll to top