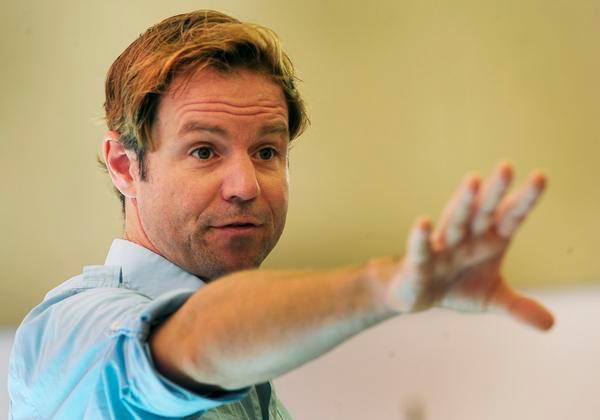 Geoffrey Kent is sitting in a quiet Boulder restaurant making a face as he recounts a fall he took during the Colorado Shakespeare Festival’s production of the ridiculously pleasurable farce “Noises Off.”

Don’t fret. It was a planned fall… sort of.

“I was really stressed about it,” says Kent, actor and fight director for a number of theater productions in town, “I’ve choreographed that fall a lot. I was stressed because I was expected to do the best one. If I can choreograph them, I should be able to do them.” He pauses. “Then I got up there,” he adds with a knowing grin.

“I was reminded that falling down the stairs is half improv. You have to feel what’s happening and go with it. I don’t fall the same way every night. I follow the same path. I go upside down but where my feet go, what I run into…”

Kent makes his character’s slo-mo tumble a thing of slapstick beauty. But the role he plays in writer Michael Frayn’s play-within-a-play is already side-splitting.

In addition to being a fight director with a national reputation, Kent regularly acts and directs. In September, he’ll cross swords in a production of “The Three Musketeers” at The Denver Center Theatre Company, where he is resident fight director. Later, he’ll head down to Colorado Springs to direct the 1930s comedy “You Can’t Take It With You” at Theatreworks.

For a few months this summer, the fair-haired 39-year-old has relocated from his home in Denver to Boulder to be nearer the Colorado Shakespeare Festival. After all, he’s fight director for and acts in both “Twelfth Night” and “Noises Off,” and he choreographed the combat for “Richard III” and “Treasure Island.”

When Nigel Gore’s twisted monarch dies pinned to the wall in the final act of “Richard III,” that contorted tableau is Kent and director Tina Packer’s handiwork. When one of the characters in Ken Ludwig’s adaptation of Robert Louis Stevenson’s cutlass-clattering adventure (directed by Carolyn Howarth) takes a 14-foot fall from the yardarm in the heat of battle, ditto.

Kent’s temporary move from Denver to Boulder could be considered a homecoming — at least in a theatrical sense.

“My mom and I have been coming to this festival since I was in high school,” says Kent, who graduated from the University of Northern Colorado. “She brought me to my first play here, my first Shakespeare. It was 1990.” The play? “Romeo and Juliet,” directed by actor and local legend Tony Church, who died in 2008.

“I was a senior in high school and had never seen Shakespeare performed live. I’d never seen a staged sword fight.” Both the play and the combat made an indelible impression.

Years later Kent met the fight director of that production, Dale Girard, now one of his closest friends. When he was introduced to Girard (who went to high school in Erie but now teaches in North Carolina) he had questions. Kent repeats one with a kind of fresh wonder. “Remember when you did that thing where the guy kicked him in the groin and he fell over?”

His fondness for the Bard runs deep. His dog Titus has stayed in Denver but will travel this winter when Kent heads for a stint at the Orlando Shakespeare Theatre.