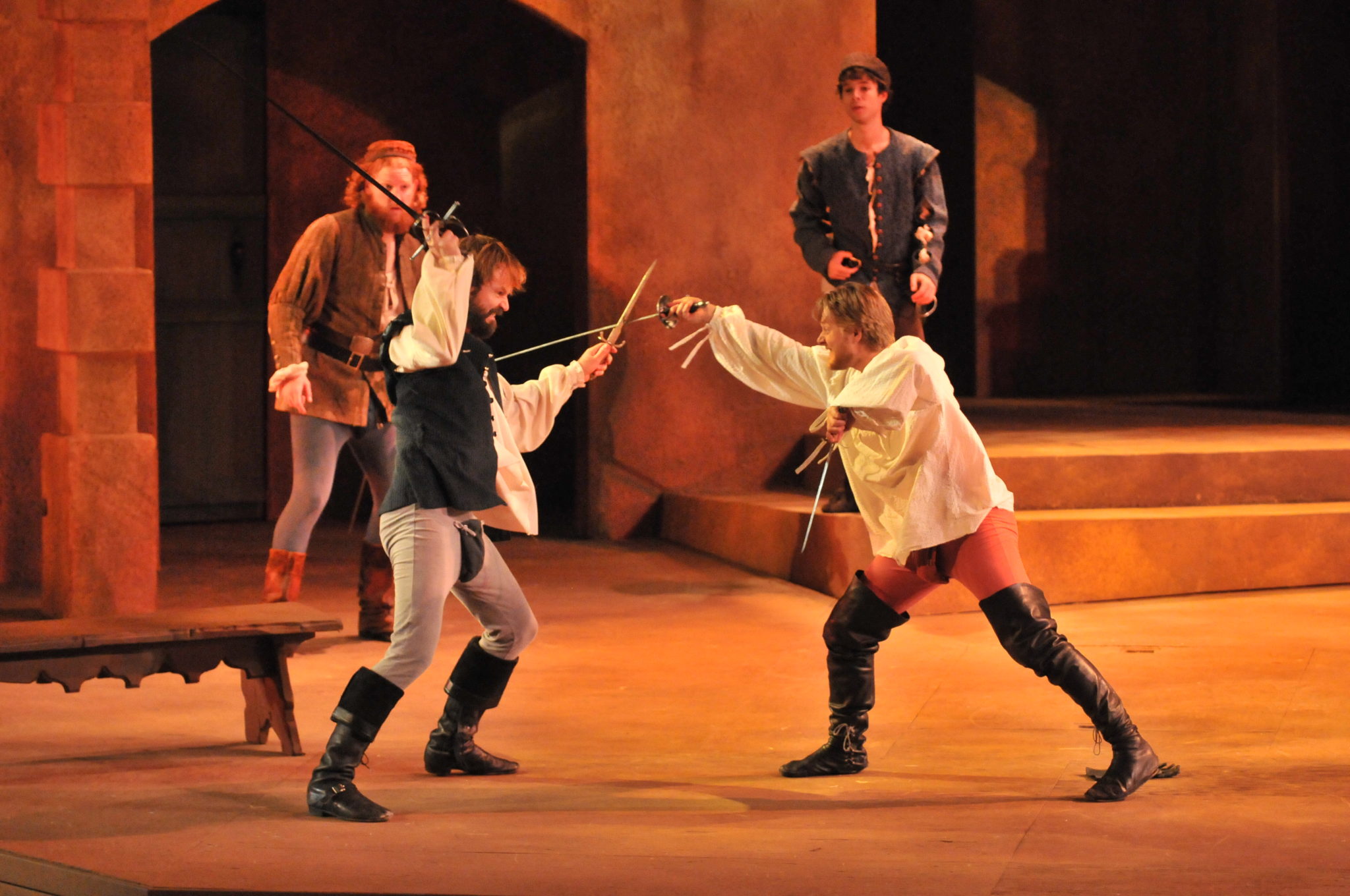 Review: This year’s Romeo and Juliet at CSF is the best in years

When I think about the Colorado Shakespeare Festival’s Romeo and Juliet, the predominant image is of Jamie Ann Romero as Juliet, longing to consummate her startlingly sudden marriage and leaping onto the bed, arms outflung, to implore the night, “Give me my Romeo.” At this point, she doesn’t know that Romeo has just killed her cousin (or is about to do so, since this production rearranges some scenes and cuts others), an act that will shatter her world. It’s odd how powerfully Romero’s gesture resonates in my imagination, because at the moment it actually occurred, the analytic part of my mind was suggesting it was too broad. Now it strikes me as exactly right, emblematic of the overall radiance of Romero’s performance.

As Romeo, Benjamin Bonenfant is an absolute charmer through the first half of the evening, quieter and more feeling than his friends, funny in his romantic hormonal confusion, moving in his interactions with Juliet. It’s only when things go drastically wrong that the performance falters. The more Romeo grieves, the more Bonenfant runs his words together into an undifferentiated stream. Yes, Romeo is sometimes a blubbering child — after all, he’s not much older than Juliet — but we’d like to see him man up by the death scene. Geoffrey Kent’s Mercutio is juicy, funny and energetic. His rendition of the Queen Mab speech is superb — a textbook example of how to vivify a monologue everyone has heard a thousand times before — as is the way he handles Mercutio’s death with progressively weakening bursts of rage and frustration rather than the usual gallant attempt at humor.

Juliet’s Nurse is often a chattering fool, an irrelevance, but Leslie O’Carroll makes her flesh and blood — a feisty peasant, full of warmth and humor, limited in her way, but so essentially strong that she easily removes the sting from the shameful scene in which Romeo’s friends torment her. If ever there was a woman, peasant or no, who could take on these callow young aristocrats, it’s this Nurse. In that perennially troubling moment when Juliet turns to the Nurse for comfort after being ordered by Lord and Lady Capulet to marry her suitor, Paris, and the Nurse caves — even though Juliet has already secretly married Romeo — O’Carroll makes sure you see how conflicted she is about this, not through some sentimental gesture or softening of the voice, but in a tough-minded way that reminds you that her very survival depends on the House of Capulet.

When I saw in the program that Mark Rubald was playing Lord Capulet, I thought it might be a mistake. One of Rubald’s great strengths as an actor is his geniality; when you see him on stage, you can’t help liking him. That’s the way Lord Capulet comes across during his early appearances, though Rubald does also manage to communicate a sense of the man’s tremendous power. When he reproves Tybalt for trying to start a fight at the party he’s hosting, there’s a barely concealed sense of menace behind his reasonable tone: Do not cross me, boy. And if Capulet’s blindness to the idea that Juliet might have any feelings of her own about marriage is so fatuous it’s almost funny, Rubald soon sends any thought of humor packing when he rejects Juliet’s pleas with terrible violence. Now you understand why the Nurse caves and why Lady Capulet — an intense, etched-in-acid portrayal by Karen Slack — turns on her own child with a mix of vindictive rage and baffled tenderness. By our standards, Lord Capulet is a batterer. By the standards of his time, he’s just doing what’s expected. If you want to find the root of the tribalism that dooms young love, look no further than here.

Lynne Collins has directed a clean, swift, well-orchestrated production, with loads of adrenaline and testosterone sloshing around, a few stumbles and many nice touches: Romeo and Juliet clambering comically on the balcony in their frenzy to get their hands on each other; some of the best-staged fights I’ve ever seen (Kent is the go-to fight director for the region); the moment when the Nurse returns briefly, tentatively, to check on Juliet after being dismissed. But most important, she’s put together one hell of a cast. I’ll have a hard time watching any future Romeo and Juliet without recalling O’Carroll’s Nurse, Kent’s Mercutio, Rubald’s Lord Capulet and Romero’s tender Juliet.

Review: Santaland Diaries wraps up the holiday in humor