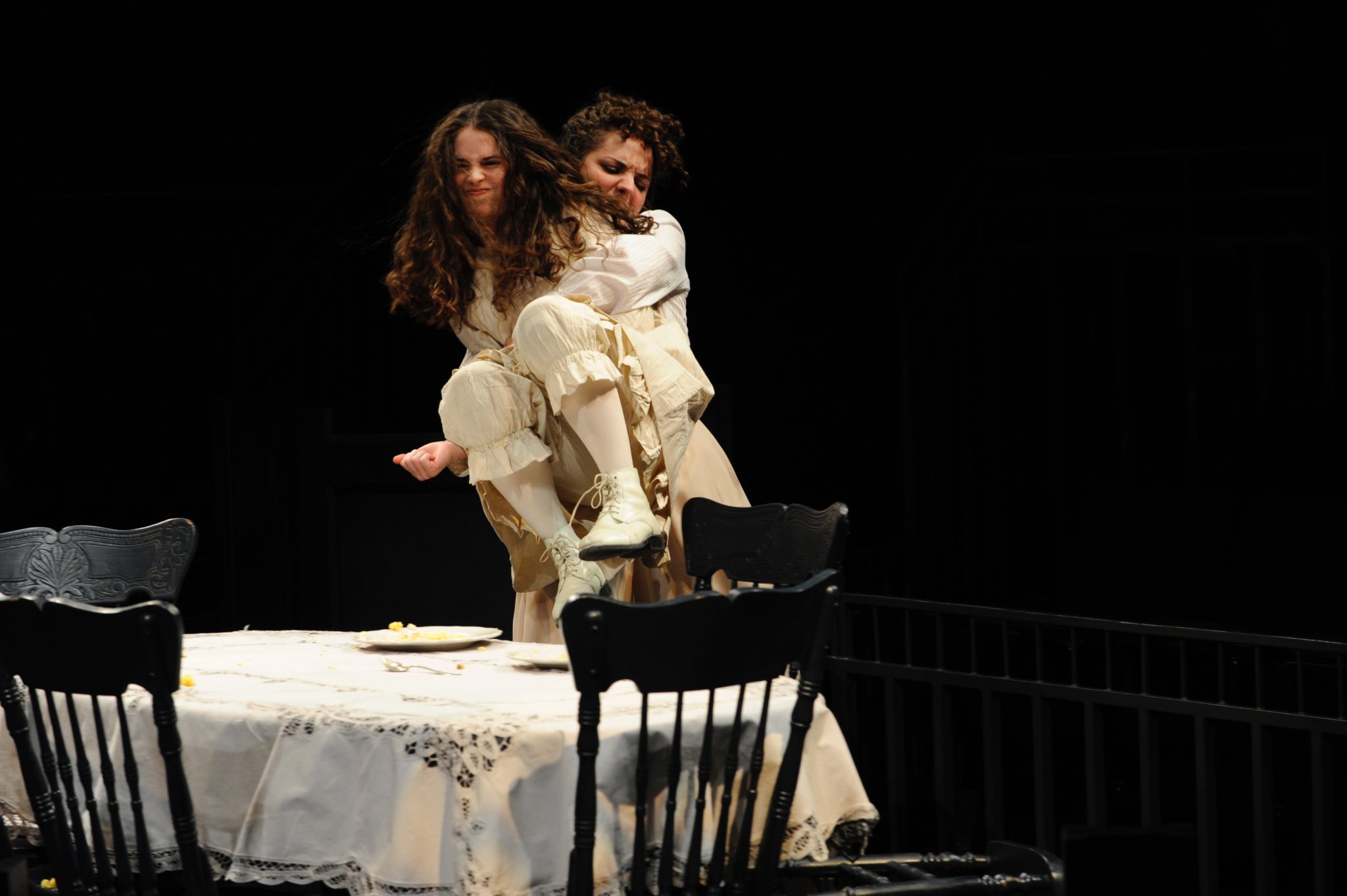 DENVER — “The Miracle Worker” is the surprise of the Denver Center Theatre Company’s fall lineup. This staging of the Helen Keller story is both elegant and bruising and the family friendly show is heart-wrenching and heroic.

The production, directed by Art Manke, features a dynamic duo in Daria LeGrand (as a young Helen Keller) and Kate Hurster (as Annie Sullivan, Helen’s teacher). Hurster, in her third year in the National Theatre Conservatory’s MFA program, captures Annie’s austerity and, more importantly, her vulnerability.

Annie isn’t simply a stern taskmaster; she suffers from self-doubt. The axiom “adversity doesn’t build character, it reveals it” applies to this Annie, however. She’s at her best when tested, by an unwilling pupil, and even more so by Captain Keller (a perfectly flappable John Hutton) and Kate Keller (a pure and doting Rachel Fowler), Helen’s parents.

LeGrand, a young actor from Kansas City, gives a remarkable performance, the kind you’ll be talking about on your way home from the theater. Feral, fearless and completely believable as a blind and deaf girl, LeGrand is altogether captivating throughout as her determined, expressive face reaches forward from between long locks of hair.

Hurster and LeGrand have excellent chemistry, the kind surely developed from long hours both in and out of a traditional rehearsal space. (Hurster reportedly took a blindfolded LeGrand in public around Denver as character work.

The table scene, where the two face off in a test of wills, is a feat of physical theater. Though, no doubt, it was tightly staged by fight directory Geoffrey Kent, it doesn’t appear so as food, spoons, plates and bodies tumble and fly. It’s funny and terrifying at the same time.

Born in 1880, Helen Keller was a national treasure during the 20th century, as she overcame her blind and deaf condition and worked as a social activist. William Gibson wrote “The Miracle Worker” as a teleplay in 1957, and reworked it for the stage in 1959. It ran on Broadway for two years. It was made into a film in 1962. (Two more film versions have been made since.)

The Denver Center production slips only as it tries to overcome the play’s one flaw — an awkward telling of Annie’s back story. “The Miracle Worker” is as much Annie’s story as it is Helen’s, yet it takes place on the Keller’s southern estate in Alabama. Gibson hints at Annie’s history — she is partially blind and she and her brother lived part of their youths in a “poorhouse” after their mother died — with moments of flashback.

Here the flashbacks feel forced and jolting. So too, a voice-over between Annie and Helen in the second act that tells us time is passing, isn’t necessary and momentarily stalls the otherwise excellent production’s momentum.

Scenic designer Tom Buderwitz’s set is exquisite. A dark floor is covered with white script, the text from Annie Sullivan’s actual personal letters. The setting at The Space Theatre, which depicts the Keller’s home, is handsomely decorated, yet uncluttered so as to give the actors room to roam.

Steven Cahill’s bluesy and evocative original music underscores some of the action and scene changes. Some of Cahill’s recorded pieces are sung by Ellis Hall, the blind R&B vocalist who actually performed at Helen Keller’s funeral in 1968.

When I first learned of the DCTC’s 2008-09 season, I wondered why the company would choose to rehash a play many are so familiar with from the three movie versions filmed during the past 50 years. But a great story well told is rewarding no matter the season, it turns out. This “Miracle Worker” surely proves that.

Review: Much Ado About Nothing
Scroll to top