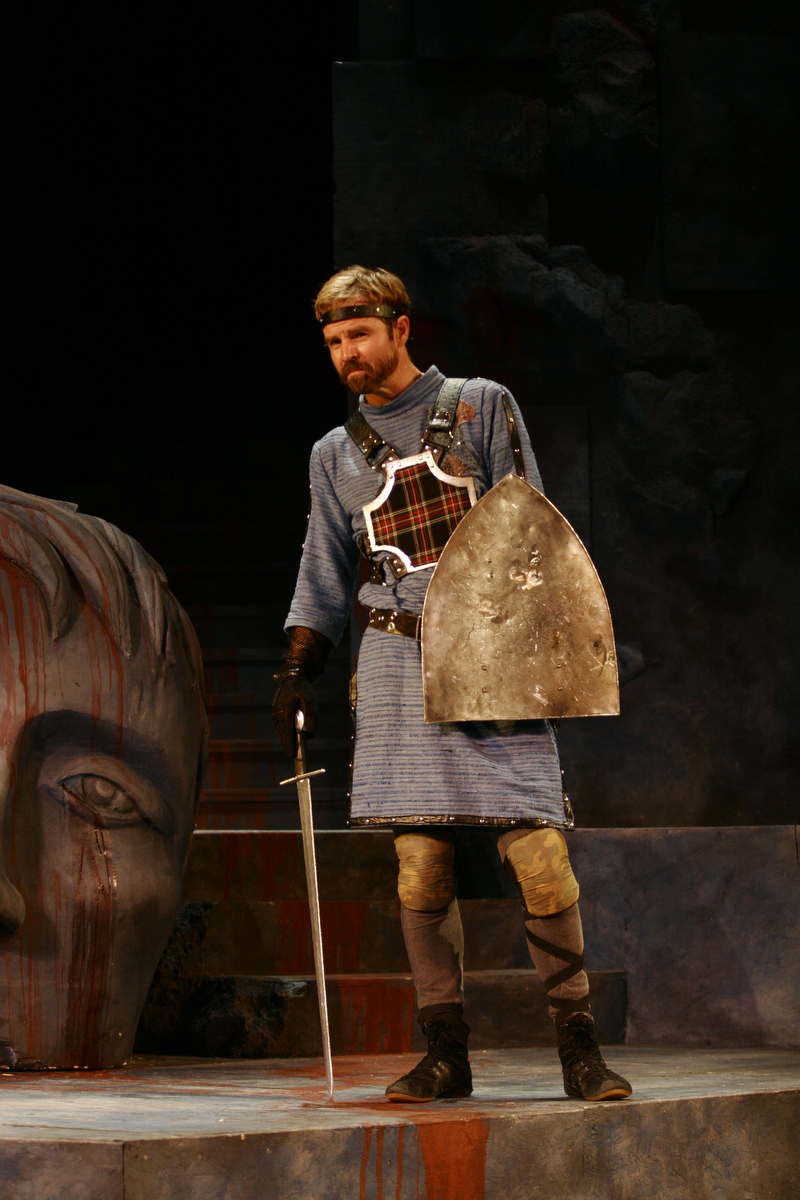 For all the dark arts that inhabit it, “Macbeth” is a very moral play. Eventually, bad behavior begets consequences for those who partake in it. The Macbeths pay for their sins of avarice and for the violent way they attain what they’re after.

Even more so, the Colorado Shakespeare Festival’s brutal version of “Macbeth” is a warning about personal will and the absence of it.

Lady Macbeth (Karen Slack) — famously — has an overabundance of personal ambition pumping from her heart. She ends up mad and suicidal.

Her husband has too little will, which opens him to suggestion from the three Witches’ occultish predictions and the “spirits” from Lady Macbeth, which she pours into him in whispers, urgings and demands.

He’s an empty vessel waiting for something to fill him up and give him purpose.

I have to admit to a personal chuckle when I learned Producing Artistic Director Philip Sneed was to play the lead role in this production in the second season since he took the post with CSF. These days, with fundraising and publicity so important to theater companies, a PAD is often the face of a festival. No questioning that now.

Of course, Sneed’s got the acting credentials to take center stage — his original theater training was as an actor, and he’s been performing all along as he’s added administrative and leadership roles to his resume.

Sneed’s performance as Macbeth gives us insight into the character’s empty-vessel flaw. Early in the show, Sneed’s Macbeth is awkward, impressionable, unsure. He’s a valiant warrior, but there are traces of doubt even in the way he stands over his fallen foes.

When he finally attains the “golden round” he’s been spurred on by Lady Macbeth to gain, Sneed undergoes a physical transformation. The chin rises, the chest puffs, the arrogance overcomes him. He’s finally comfortable in his own skin.

Even as Macbeth becomes tormented by visions of those he’s betrayed, and by his own guilt, there’s a conviction that was missing earlier in the story.

Slack is a formidable counterpart. She commands the stage throughout the play, and cackles and keens her way through the “damn spot” speech.

Geoff Kent cuts through the play’s darkness — literal and figurative both — as a virtuous and good-hearted Macduff. He handles the scene in which he learns the fate of his family by going inward and contrasting the violence with stillness. It’s a powerful moment.

Collins’ decision to fill a handful of blanks in Shakespeare’s script with wordless scenes works brilliantly. In the first battle scene, Macbeth accidentally thrusts his sword into an innocent who’s wandered into the fray. It foreshadows what’s to come and sets up the dual idea of “blood” — both the stuff in our veins and our lineage — that runs through so much of the play.

Collins also invents a brief backstory scene for Lady Macbeth. Though it’s hinted at later in the script, in this version we see Lady Macbeth as she loses her own baby who refuses to nurse. After intermission, Collins has several characters take stage in tableau while the action is focused downstage. It reminds us how the story is moving along for more than the central character.

This is a brutal story, and Collins doesn’t shy away from its brutality — Macduff’s son’s death is particularly disturbing — but the violence never turns gratuitous.

Much of the show’s design is effective, but occasionally it’s jarring. Clare Henkel’s costumes suggest a medieval Celtic world. The three Witches’ frightful makeup is too much in the first scene, but it works once night falls at the outdoor theater and Victor En Yu Tan’s light design takes over.

Michael Rasbury’s sound design and original composition includes throbbing Celtic music and several recorded accents, including a chilling sword-on-sword sound. The voice-overs of dead characters haunting Macbeth, though, are too dry and mechanical and take us out of the play.

Scenic designer Andrea Bechert has placed a large decapitated head upstage center, and a hefty severed hand down left. It’s balanced with a crumbling pillar on the other side of the stage, and grizzled, peering faces seem to emerge from the rock walls that serve as the backdrop.

Cleverly, the head upstage serves a purpose that springs from the script in the final scene. A head of state has fallen.

The image, and the play, serves as a warning: Violence begets violence. Or as a haunted Macbeth muses: “Blood will have blood.”