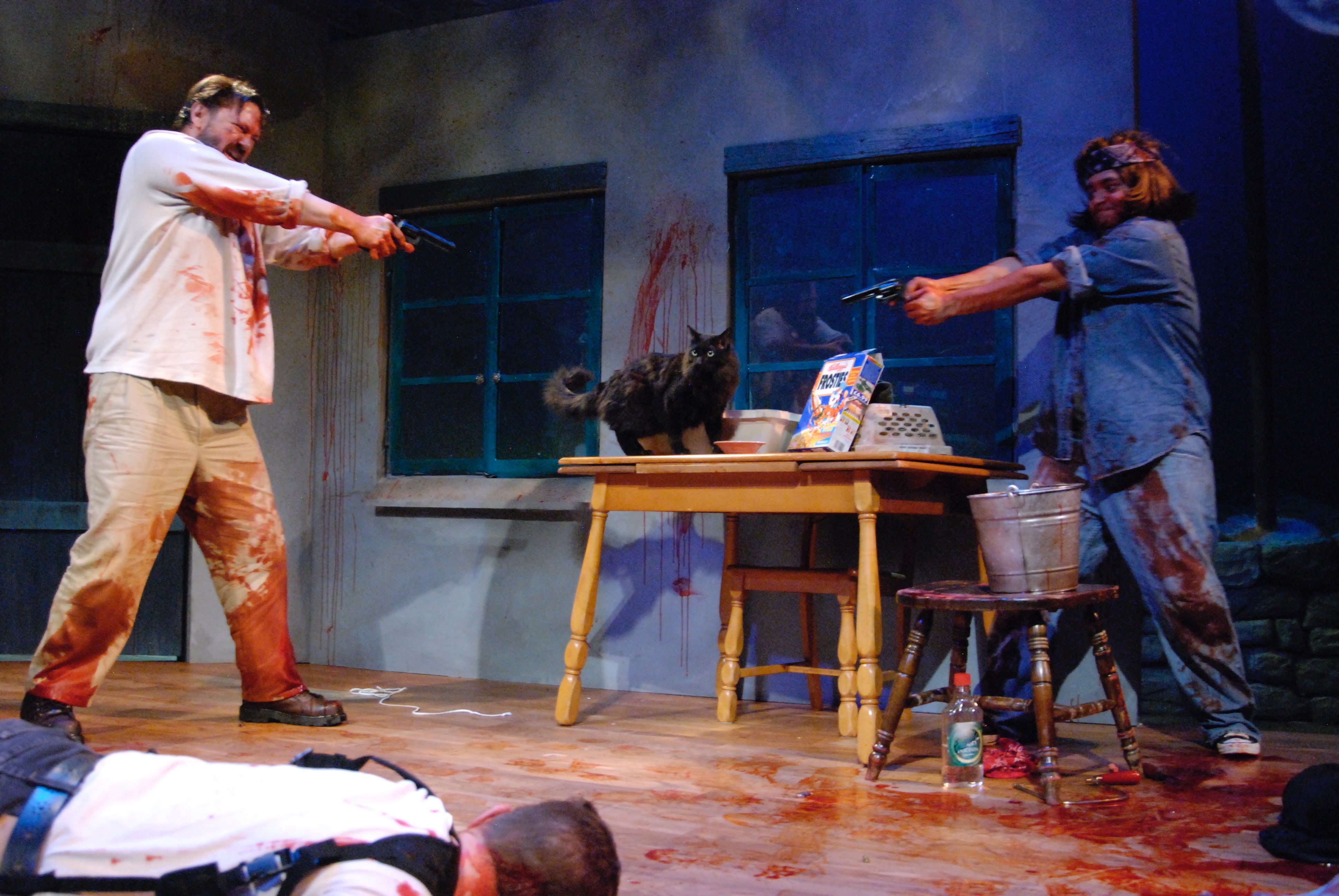 Over the last few years, Curious had become somewhat peripheral on the mental map where I chart the progress of Denver’s serious theater companies. Curious’s casting was often uneven, and its choice of material occasionally poor. With last month’s 9 Parts of Desire, however, the company moved into strong focus, and now The Lieutenant of Inishmore flings it into the foreground with a great whoosh — a hurricane-force wind of violence, discovery, comedy, horror and surprise.

The irony is that I’d taken my seat with sulky reluctance, unable to come up with a good excuse to skip this one. Word was that the production began with a dead cat, the brains dropping from its cracked skull; continued with a torture scene in which the victim was hung upside down to have his toenails removed; and concluded with orgasmic gushers of blood. This is not the kind of spectacle I can endure with equanimity. I’ve missed many of the finest movies of the past decade because I couldn’t figure out how I’d get their disturbing images out of my mind once they’d entered; I have enough trouble forgetting what bloody, vicious times we live in to go about my daily life with some semblance of equanimity. When I see blood, I think of dead soldiers, civilians dismembered by bombs. When I see a man hanging from the ceiling, I think of Abu Ghraib.

The Lieutenant of Inishmore is indeed bloody. The aforementioned dead cat belongs to Padraic, a crazed killer who was kicked out of the IRA and in response formed a splinter group, the Irish National Liberation Army, declaring himself its lieutenant. (The real INLA was most active in the late 1960s and early ’70s and still exists as a crime-riddled and tiny faction.) Terrified of Padraic’s violent temper, his father, Donny, tries to persuade an epicene young neighbor, Davey, to admit he killed the animal. Even as they debate, Padraic is busy torturing a drug dealer; he interrupts his work to take their call on his mobile. Plot complications include the machinations of three other INLA members who have turned against Padraic, and the coming to sexual maturity of Davey’s psychotic sister, Mairead, who likes to fondle guns and sing Republican songs, and who has been honing her revolutionary edge by shooting out the eyes of local cows.

There’s nothing scattershot about the way the play is constructed. It’s tight and clean, and the dialogue startles you into open-throated laughter again and again. What makes it so funny is the contrasts it presents — between high-minded rants about a free Ireland and the pettiness of the men’s violence, between Padraic’s sadism and the blubbering sentimentality that has him seated on the ground, weeping for his cat while his torture victim dangles beside him.

We like to think of violence in art, like nakedness, as having some thematic purpose. Macbeth kills lots of people, but it’s not in the service of titillation. We’re told again and again — by Macbeth’s own uneasiness and remorse, by Lady Macbeth’s madness, by the other characters — that what he does is wrong. Even when we empathize with a sadistic killer — Shakespeare’s Richard III, say — we know that he’s killing for a reason, and we’re absolutely clear about who he is. But things change. In the past couple of decades, there have been a slew of works that have no moral center at all, about people who kill for no reason, people we’re supposed to admire for their cool, their ability to joke and eat in the presence of someone who’s in hideous pain or dying.

Though it does exult in pain and blood, that’s not exactly what this play’s about. Obviously, it’s a blistering satire on the IRA — or at least on the IRA as romanticized in Irish culture. It mocks the way revolutionary movements splinter due to egotism, disagreements on obscure theoretical points and out-and-out bloodthirstiness. But The Lieutenant of Inishmore doesn’t glorify violence; it exposes it as the last resort of stupid, mentally powerless people. I have to admit that all the ghoulish bloodletting does give a certain horrified pleasure — witness all the guilty, chuckling gasps emitted by the audience. And in the end, there is something cathartic about the loud, rollicking music and the pure over-the-topness of the entire experience.

Chip Walton’s direction couldn’t be better. All of the action is fully realized and meticulously timed, and he has assembled one of the best casts I’ve seen in Denver. Gene Gillette is mesmerizing as Padraic, as steely and scary as he is ridiculous. Anthony Powell and Matt Zambrano anchor the action as Donny and Davey, respectively, Powell with cringing resignation, Zambrano making Davey a gnome in a shiny, feminine wig. With her long-legged stride and red hair, Laura Jo Trexler is a striking Mairead, and there are stellar performances from Steven Cole Hughes, Geoffrey Kent and Michael Morgan. Thomas the Cat plays Wee Thomas the cat with a wide-eyed aplomb that brings down the house.

Review: Of Mice and Men