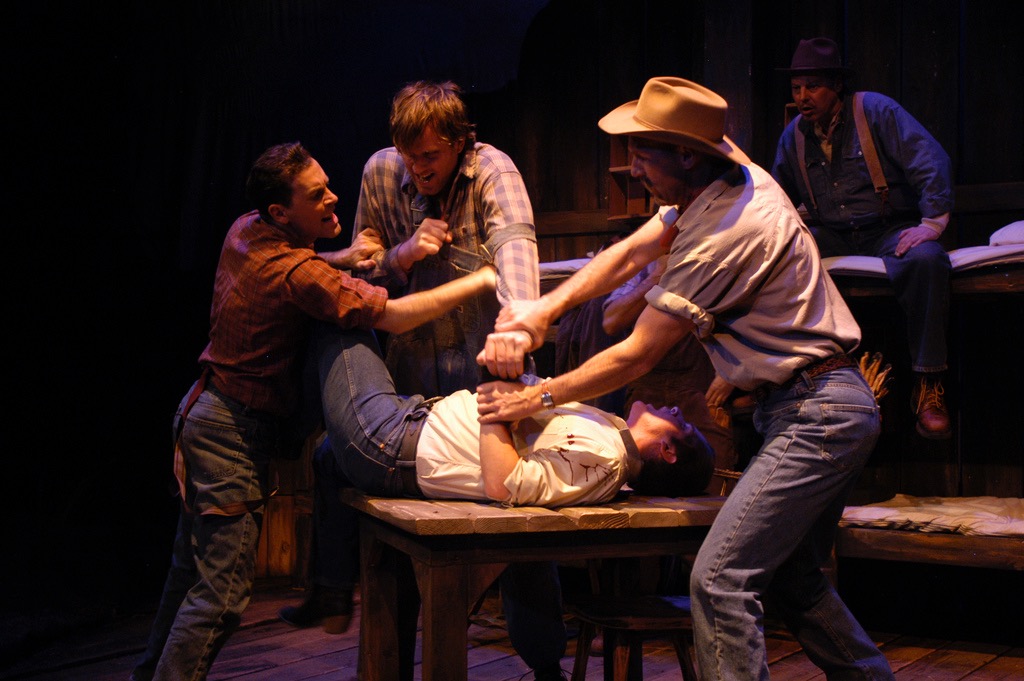 Review: Of Mice and Men

If anyone has wondered why the Arvada Center needed its intimate new studio theater, “Of Mice and Men” offers up the best reason to date. Effectively mingling material, manpower and edifice, Terry Dodd’s confident new staging breathes life into an American classic that by all rights should have choked on its own dust decades ago.

Instead, it turns vibrant and urgent in the new theater’s closer quarters.

“Of Mice and Men” is, of course, John Steinbeck’s 71-year-old tumbleweed about frontier hobos living off the fat of a land that, ironically, has no fat to live off of. And while it may not have been swallowed whole in the cavernous mainstage theater next door, it would have lost in immediacy and contrast. Here, loyal dreamer George’s contained introspection is effectively set against the David’s- eye view the audience gets of Lennie, the enormous, sweet simpleton capable of unintentional violence at any time.

After all, the closer you stand to a giant, the more gigantic he seems.

“Of Mice and Men,” which debuted both on page and stage in 1937, still has serious staying power. Paul Newman will make his professional stage-directing debut at age 83 with a fall staging in Connecticut. But how? How does the tale of two migrant workers hoping for their own stake someday stay so pertinent?

Because from Eugene O’Neill before Steinbeck, to Arthur Miller after him, exposing the American dream as an inequitable lie never seems to lose its relevancy. Take in the Denver Center’s simultaneous world premieres of “Lydia” and “Plainsong,” and it’s uncanny how informed both are by Steinbeck’s benchmark.

Here, the modest but elusive dream is a mere 10 acres with windmills and some apple trees, a pigpen and some rabbits that Lennie hopefully won’t snap. And it’s a dream just a few hundred dollars but a million miles out of reach.

None of which would make seeing “Of Mice and Men” again all that necessary today if it were not for the superlative cumulative effort by Dodd’s cast and crew, from Brian Mallgrave’s ranch-house set and evocative exterior to Grant Evenson’s 3-D sound design.

Of particular clarity here is the contrast between what traits are valued in this world (hard work, physical strength and isolation, even loneliness) against what is considered suspicious or unnatural — namely friendships of any kind. An old man’s beloved dog is shot for stinking. Any man fraternizing with the only woman on the ranch engenders hostility. And there is an ongoing, underscored fascination with the indeterminate origin of George and Lennie’s friendship.

This staging is brutal yet infused with an uncommon humanity and vulnerability, thanks mostly to Lennie, played with believable warmth and without cliche by Patrick Brennan. And while Lennie and George may not be blood-related, the highlight of Kent Burnham’s understated and effective (if a bit too well-coiffed!) performance as George is in how he communicates the simultaneous burden and bondage of family. Burnham made his mark here with a string of impressive performances at the Denver Civic Theatre, but “Mice” marks his return after six years.

The excellent cast includes distinguished performances by Louis Schaefer as the old dog, Candy, and Mark Rubald as foreman Slim. Of particular note are C. Kelly Leo, who naturally captures the hypocrisy, isolation and inherent unfairness of being a woman in this world; and Chaz Grundy, a local funnyman who wholly transforms into the segregated black ranch hand Crooks.

If you know the story, you know it culminates in a neck snap, and it’s so harrowingly performed here, when the victim went limp, I wanted to shout for an ambulance. It was that believable.

So, sadly, is the ongoing unlikelihood that migrant workers in 2008 are any more likely to achieve the happiness they come looking for here than they did in 1937. Aspiration alone isn’t enough.

Sadly, it never has been.

Review: The Lieutenant of Inishmore
Scroll to top