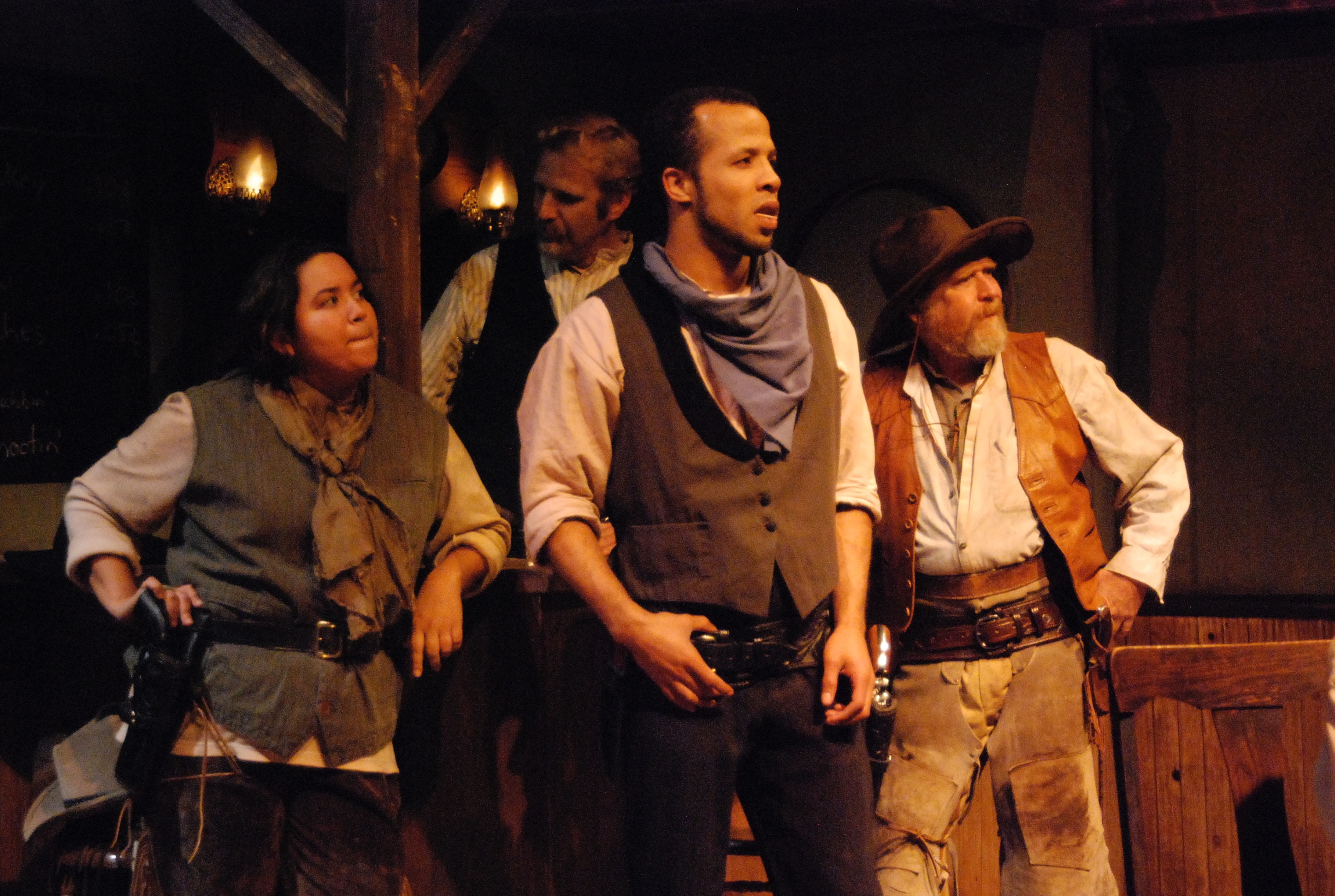 Dirty and daring, intense and intimate, Listen Productions’ cowboy-themed “Macbeth” is Shakespeare for a new generation. As lawless as the frontier territory it mines, this is Shakespeare for those unbeholden to dusty old rules of verse or form. For those who want to feel something real in a theater, from their spines down to their spurs.

Performed with abandon by a star-studded cast of 18 in a space that holds not even 100, this outlaw “Macbeth” is visceral, bloody and raw, a rare Shakespeare experience that honestly can be called thrilling.

Director Geoff Kent transforms “Macbeth” from medieval Scotland to the Colorado frontier where fair is also foul … and foul is also fair. Purists may take umbrage at its colloquial liberties, at its ranch hands and bandits, its whores and firewater, but this is Shakespeare at its most adventurous. It offers card sharks, violins and violence. They are guns, blades and thus, of course, plenty of endangered children.

It’s also a fun party game: Drink a shot every time you connect another dot to the lamented HBO serial “Deadwood.” (I took 14 … of Diet Coke).

Forget opening the tale with the mere report of a faraway fight. Kent shows you the jawdropping bloodshed in a scene that establishes our Macbeth (William Hahn) as one bad (bleep) frontier action hero. It all works because this rebel “Macbeth” is firmly rooted in the reality of life in the 1870s, especially in its profound depiction of frontier women.

Macbeth’s right-hand man is a woman. Banquo (GerRee Hinshaw) is inspired by Calamity Jane – a tough, drunken mother forced to shed all vestiges of her womanness to survive in this man’s world. Lady M. (Karen Slack) is hooked on the opiate Laudanum. The weird sisters, led by a bone-chilling, seductive Trina Magness, cast their spells not over a boiling cauldron but over a horse trough with cool, underwater lights.

These three widows-turned-whores have turned to the world of the occult only after the physical world has failed them. One can only imagine the violence done unto them – and now they want revenge. Pity Macbeth, the man they portend shall be king. Or, in this case, mayor. OK, the title is not as sexy, but that’s the highest (official) level of power one can aspire to in this world.

But this Macbeth and his wife are far more than witches’ pawns. The sisters flip a switch, but the ambition they release in these lovers is all theirs. The Macbeths make for a powerful and passionate political couple, more intertwined as two than as one.

The Macbeths are the only major characters in this story who aren’t parents. But of course, in this tale, being a parent only makes you vulnerable to your enemies, evidenced by Banquo’s near-miss and the shocking slaying of Macduff’s two children.

But to inspired effect, our Macbeths are deeply haunted by their lack of progeny. Slack creates an utterly understandable Lady M., a woman lost who carries an empty infant crib in one hand, a spoonful of opium in the other. Macbeth, meanwhile, soliloquizes sadly to an empty baby boot, just as “Deadwood’s” Swearingen pontificated to a beheaded Indian (Hahn’s a marvel, but he doesn’t stay quite consistent with the dialect all the way through).

To see this Lady M. barren, most likely through multiple miscarriages, is a revelation: These two aren’t driven by ambition; they are driven by loss. This adds mitigating layers of understandable sadness to their actions. And their raging consciences nearly redeem the irredeemable.

When both are gone, the tragedy of “Macbeth” no longer seems “the ultimate study of evil.” After all, the “Fiend of Colorado” is taken down by, of all things, a preoccupying distraction with a riddle. And she’s not, nor ever was, a woman of any real power.

There are nitpicks. By “westernizing” the lingo and making the story so geographically specific to southern Colorado, references to places like Durango and Montrose draw unintentional giggles from the audience, as do some of the cowboy accents. The ever-present clunking of cowboy boots swallows some lines.

Tina Anderson’s multilevel set – a decaying hotel saloon run by the Macbeths – ranks among her best work, but this is not a one-set show. So it’s not always clear where we are. The brazen climax is a nod to a frontier custom of displaying the corpse of a bandit like a trophy, but the scene wasn’t quite yet working on opening night.

You just don’t often see the Bard performed to this level of quality in this intimate of a setting. Kent’s playing this card game with a stacked deck.

Best Supporting Actor in a Musical

Review: Of Mice and Men
Scroll to top