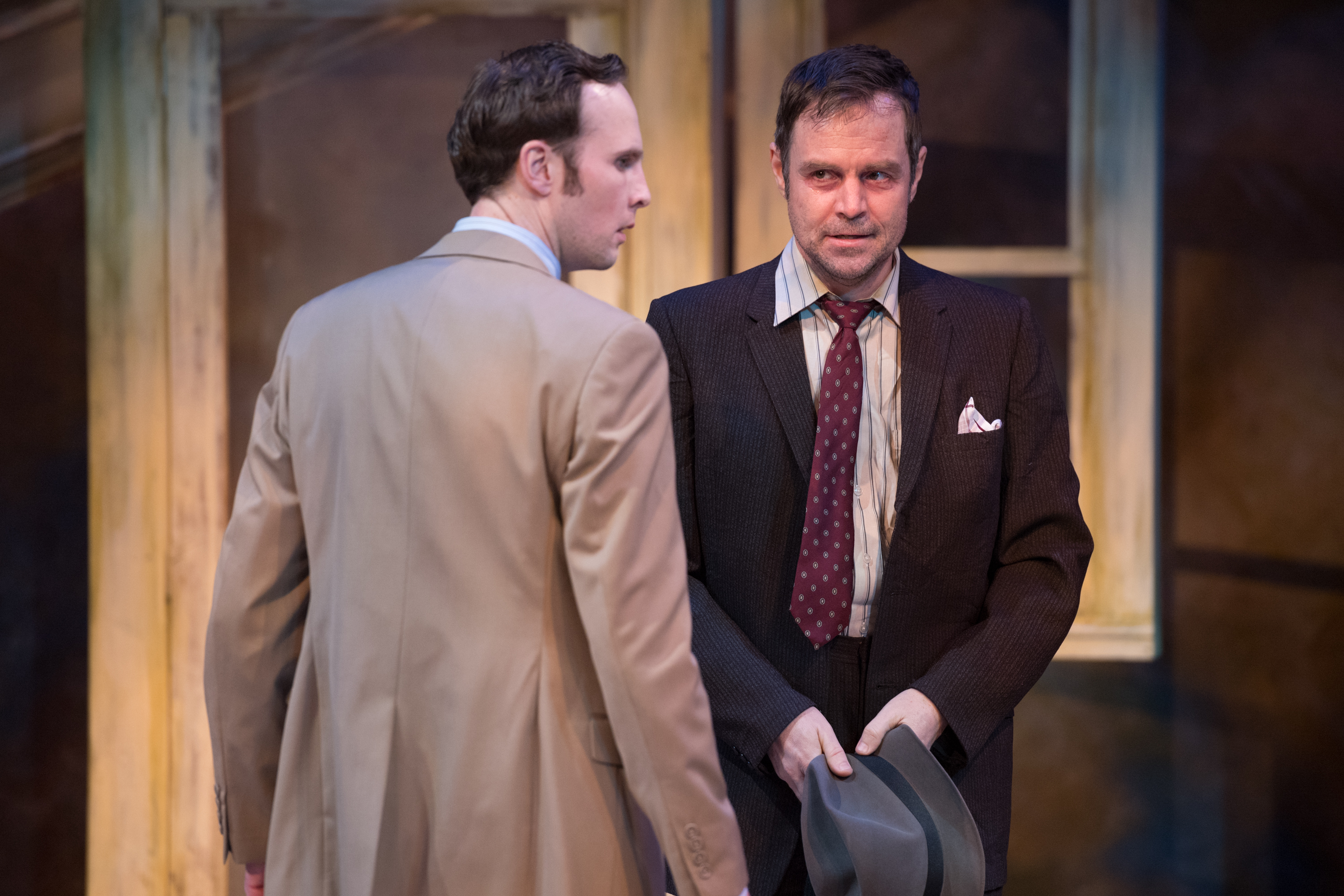 REVIEW: ALL MY SONS at the Arvada Center

Though Death of a Salesman is often considered Arthur Miller’s quintessential masterpiece, All My Sons is equally riveting, as it juxtaposes the American dream of making money and supporting one’s family, with the harsh reality that sometimes money is made at the expense of what we hold dear.

The wonderful cast of the Arvada Center’s current production gives us a vivid glimpse into the inner life of the Keller family, which lies at the heart of this spellbinding American tragedy.  Based on real events that occurred during World War II, this tale continues to resonate. The action takes place in the span of one day. A tree planted to honor the Keller’s son, missing in action, has been cracked in half by the wind.  The missing son’s sweetheart, Annie, has returned, but she’s come to see his brother.

Family Patriarch Joe Keller, performed by Sam Gregory, is a back-slapping, hail-fellow-well-met, jingling the change in his pockets and charming the neighborhood children. Joe embodies the American dream; a man who pulled himself out of poverty by building his own successful business. The title “All my Sons” is lifted from one of the play’s most powerful moments, when Joe realizes that all the young men who died in the war were like his very own sons.  It’s a startling moment of recognition and compassion, which Gregory plays with total conviction.

The family matriarch, Kate, is portrayed by Emma Messenger, exuding a brash charisma that belies her vulnerability, whether teasing her husband for accidentally throwing out potatoes, or desperately defending her belief that her missing son is still alive.

The Keller’s other son, Chris, is sensitively portrayed by Lance Rasmussen.  Chris’s idealism makes him unique in his family, and in the neighborhood. He describes his time serving in the war with a yearning for the incredible loyalty exhibited by men willing to die for one another. Adjusting to civilian life has been difficult.  “You don’t love a man here, you eat him,” Chris says bitterly.

Annie, the girl who grew up next-door, returns to the Keller’s home for the first time in years.  Played by Regina Fernandez, Annie brims with warmth and vitality, revealing much strength as she fights for what she knows to be true, and for the man she loves.

Each of the smaller characters are beautifully portrayed as well. Zachary Andrew as Frank, is charmingly optimistic, idiosyncratic, and direct.  Jessica Austgen as Lydia, flits through her scenes with alacrity, lending a much-needed breeziness to this weighty play, while Kate Gleason’s portrayal is indirect and cutting.  Abner Genece as Dr. Bayliss, exudes an incredibly likable and kind demeanor.

As we approach the play’s crescendo, Geoffrey Kent appears like a walking ghost, embodying the role of Annie’s brother.  This part is a real breakthrough for Kent, who’s made a whole career of playing confident, sunny, swash-buckling characters.  Georgie is a sad and simple storm-cloud of a man, portrayed by Kent with substance and honesty. He has come to remind the Kellers of a devastating secret they’ve been avoiding.

The American dream has become the American nightmare, as Joe Keller’s relentless pursuit of money is revealed to be not only his greatest strength, but his flaw, as well.

This universal theme … We see similar incongruities in the news every day.  The BP oil disaster became a money making venture for PR firms. Companies engage in illegal dumping, because it’s cheaper to pay a fine instead of disposing of toxins legally.  Entire industries are built around human suffering, including for-profit prisons and detention centers.

ALL MY SONS shines a bright light on this type of devastating incongruity, as relevant now as when this timeless classic debuted in 1947, just after WWII. As Chris Keller tells his father, “Money, say it enough and it doesn’t mean anything.”

Through these complex, well-wrought characters, Miller asks us to question the machinations of war and industry, since those who die in war– are, in the end, all our sons, and daughters.