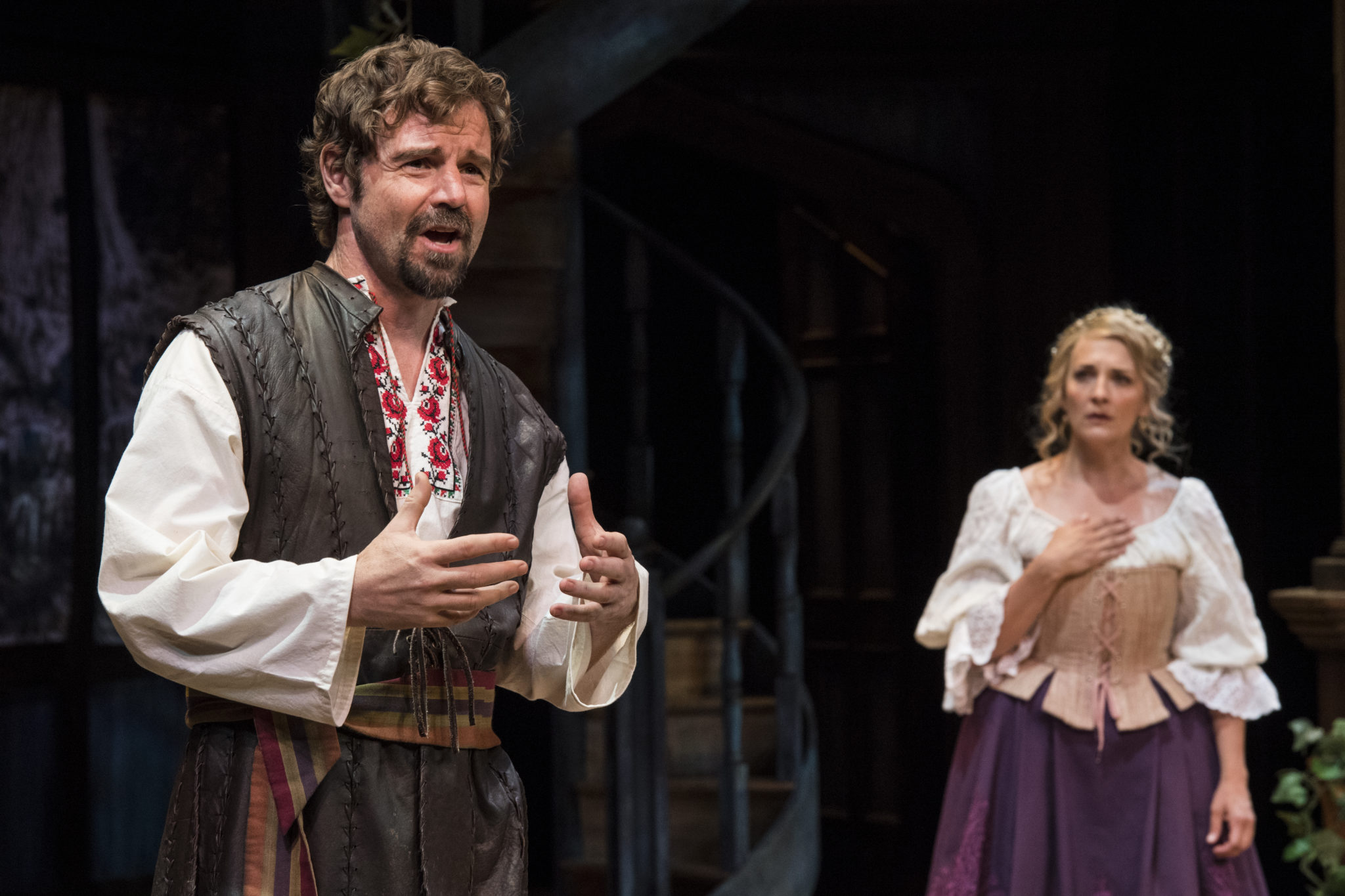 At Utah Shakespeare Festival, a well-acted ‘As You Like It’

By Barbara M. Bannon Special to The Tribune

‘As You Like It’ » Animated actors help compensate for the slow pace.

Cedar City • Shakespeare’s fascination with transformation — the process of becoming — and the surprises that inspire change and growth in his characters are a common thematic thread in his plays. Love is the ultimate transformer, and its power to alter lives, happily or unhappily, is at the center of the three productions that just opened at the Engelstad Shakespeare Theatre at the Utah Shakespeare Festival: “As You Like It,” “Shakespeare in Love” and “Romeo and Juliet.”

“As You Like It” may be Shakespeare’s definitive depiction of transformation. Scarcely a character in the play does not undergo a profound change. The Forest of Arden is like a bucolic academy: The banished duke and his men find peace and a satisfied life; Rosalind, Orlando and Celia grow up, fall in love and get married; Orlando’s brother, Oliver, is redeemed from his wicked ways; even the evil Duke Frederick has a change of heart and finds religion. After “graduation,” the characters return to the real world to put into practice the lessons they’ve learned in the forest.

The world of the play is already topsy-turvy. The forest proves to be more civilized than the court, where one expects to find culture and gentility. Rosalind and Orlando are kindred souls who become outcasts because their honesty and innocence draw others to them, attracting the envy and hatred of uncle and brother. Celia speaks for all the characters when she says, “Now go we in content/ To liberty and not to banishment.” In the forest, they find the freedom to discover and reinvent themselves.

The strongest element in director Robynn Rodriguez’s production is the forest environment she creates, a pastoral paradise. Panels of greenery drop down the bare blue walls of Scott Davis’ set, and flowers festoon the balcony. Michael Pasquini’s lighting mellows to sunny and golden. Matt Tibbs’ sound design is punctuated with birdsong. Musicians play and sing not only songs from the text but additional ones with music composed by Brandon Scott Grayson, but this has unfortunate consequences. A long play becomes even longer, and the pace slows to a crawl. “As You Like It” begins to drown in its own words.

The animated performances go a long way to compensate for the production’s lethargic moments. Cassandra Bissell’s vivacious and adventuresome Rosalind is a perfect complement to Susanna Florence’s sensibly straightforward, but playful, Celia. Jeb Burris leavens his Orlando’s romantic aspirations with inventive practicality. Jonathan Haugen’s Touchstone walks a clever line between caustic and droll, and Michael Elich avoids the trap of turning Jacques into a melancholy mope; his dynamic Jacques is simply a failed idealist disappointed by life. As Oliver, Geoffrey Kent’s repentance seems so genuine that we never question it. John Preston creates a generous, open-hearted Duke Senior, and festival founder Fred Adams makes a rare acting appearance as the loyal Adam.

Arden’s rustic residents are characterized like dolts in many productions, but Jack Lafferty and Latoya Cameron invest homespun philosopher Corin and easygoing, amiable Audrey with needed depth, and Kelly Rogers’ Phebe and Eric Schabla’s Silvius are competing studies in obsession: She is all he wants, and all she wants is to escape.

“As You Like It” has many charming moments, but to work as a comedy, it needs to pick up the pace. Hopefully as the run goes on, and actors settle into their roles, the second act will acquire more momentum. Shakespeare has some insightful things to say here about the illusion and reality of love and the ways they reshape our lives.