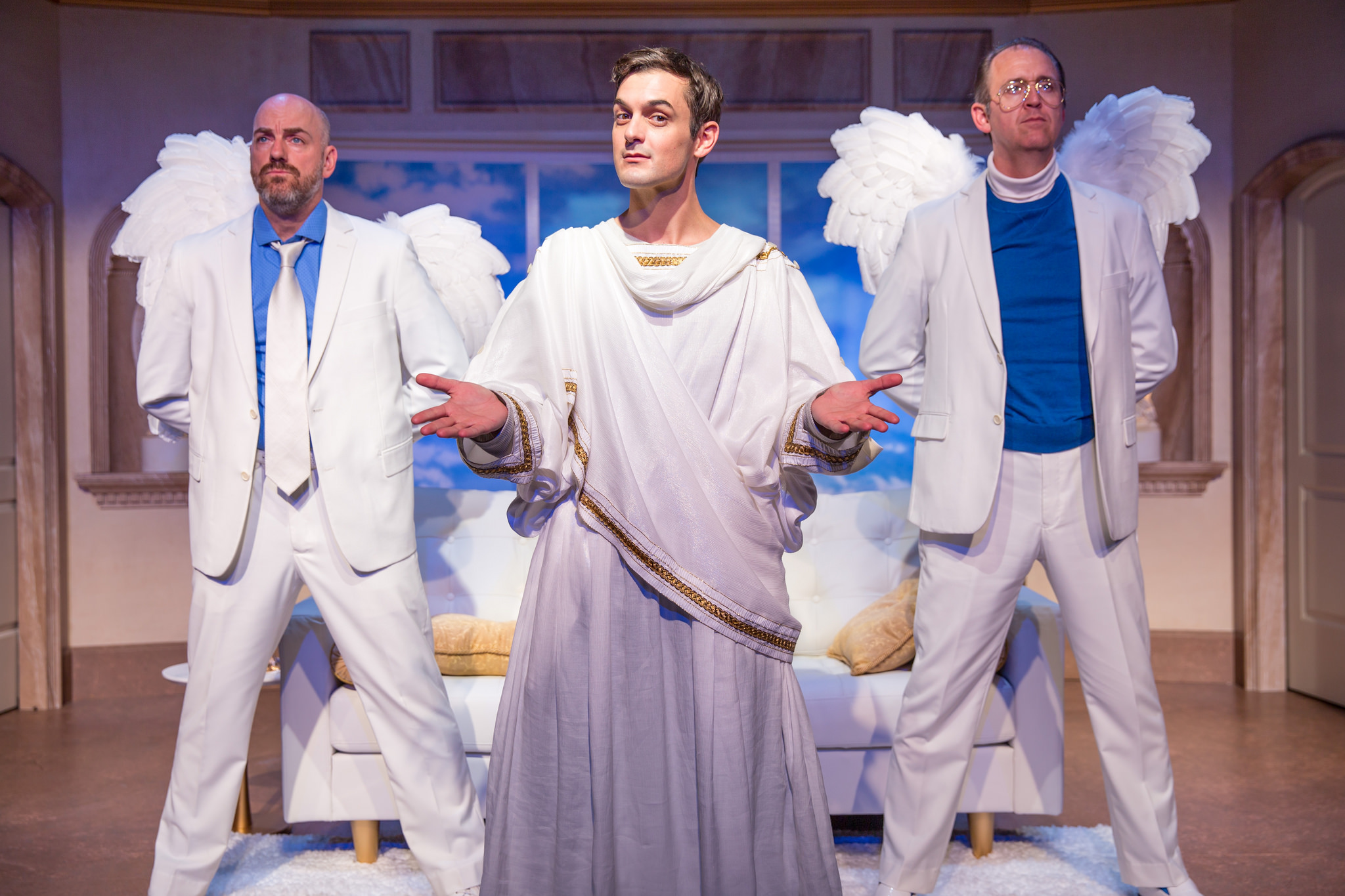 Review: Wesley Taylor Offers Up Heavenly Hilarity in An Act of God

When she was four years old, my friend’s daughter Joy was probing one of the most profound mysteries of the universe. A passionate pursuer of justice and mercy even at that young age, she was sitting on the pot and interrogating her mother about the world. Why, given a caring and all-powerful God, was there so much suffering, she wanted to know. Why wars, diseases, bereavement and death? Her mother offered one answer after another, and, perched on her throne, Joy pondered them all. Finally, she came to her own conclusion: “God’s a poophead,” she announced.

And now we have confirmation. God has appeared to us in Denver in the person of Broadway and television actor Wesley Taylor (Smash, The Good Wife) and is manifesting himself at the Denver Center’s Garner Galleria in An Act of God. In this ninety-minute script by David Javerbaum, winner of multiple Emmys for his work on The Daily Show, God explains that he’s “a jealous, petty, sexist, racist, mass-murdering narcissist” — something we could have guessed simply from the state of the world — who has come back to edit the Ten Commandments because they’re out of date, keeping some, adding a few more. The version he’s working from is a concrete Ten Commandments monument on a courthouse lawn in Tulsa, Oklahoma. With God are his two favorite angels: Gabriel, who actually seems quite a bit more compassionate and ethical than the deity himself, and Michael, who’s prone to asking difficult, Joy-style questions, and whom God rapidly silences and punishes. More than once.

Lounging in dazzling white robes on a dazzling white sofa in an elegantly dazzling room, God acquaints us with his thinking. He doesn’t have much patience with football players’ constant evocations of his name, and he mocks evolution deniers — well, sort of. It’s possible he actually meant this: “I planted all of it…. In Me all things are fakeable. I molded the fossils; I modified the DNA; I specialized the finch beaks; heck, I booked Darwin’s cruise.” It does turn out that he has no problem with homosexuality, and the evangelical insistence that he created Adam and Eve, not Adam and Steve, is exactly backward. Steve did precede Eve. Eve was created later through surgical intervention: “And so Steve ate of the tree; and he bid Adam eat of it; and the knowledge that their lifestyle was sinful shamed them; whereupon they grew embarrassed and cloaked themselves in fig leaves, the first clothing, which represented the entirety of the fall collection.”

But don’t relax in your seat right away, assuming an enlightened God who’ll rightfully ridicule right-wing hyper-religiosity while honoring compassionate politics and perhaps dropping the occasional genuinely enlightening truth. This is also a God who enjoyed watching Abraham’s terrible sorrow when he was ordered to kill his first-born son, Isaac, finds the Book of Job insanely funny, cannot comprehend his own son Jesus’s desire to redeem humankind, and thinks the Holocaust was worth it, because “no Holocaust, no Cabaret” (complete silence from the hitherto loudly laughing audience on this one). He is indeed petty and mean-spirited. He loves all of us in the Galleria, he says, but he loves those in the expensive seats most.

God sort of gets away with all this because his earthly manifestation — that is, Wesley Taylor — is so charming, sometimes puckish, sometimes tough, and has such magnificent abs. But if you’re hoping for a moment of redemption, a Hallmark Card aphorism, a realization that Jesus had it right and suffering is terribly wrong, don’t hold your breath. True, God does say, “Thou shalt believe in thyself,” which could comfort the new-agey sorts among us, but that’s because, as awful as we human beings may be, we are still his “greatest creation.” Here God/Taylor pauses. “And I am your worst.”

Is the message that we’re better off without our gods? That a god-free universe might be less murderous, vicious and petty? I don’t think there’s a message at all. Just ninety minutes of sheer hilarity, aided by fine, angelic performances by Erik Sandvold (Gabriel) and Steven Cole Hughes (Michael), and excellent pacing, courtesy of director Geoffrey Kent.

But we do get proof right from the horse’s mouth that four-year-old Joy had it right all along. God is a poophead.

Feature: An Act of God has God Taking The Stage
Scroll to top