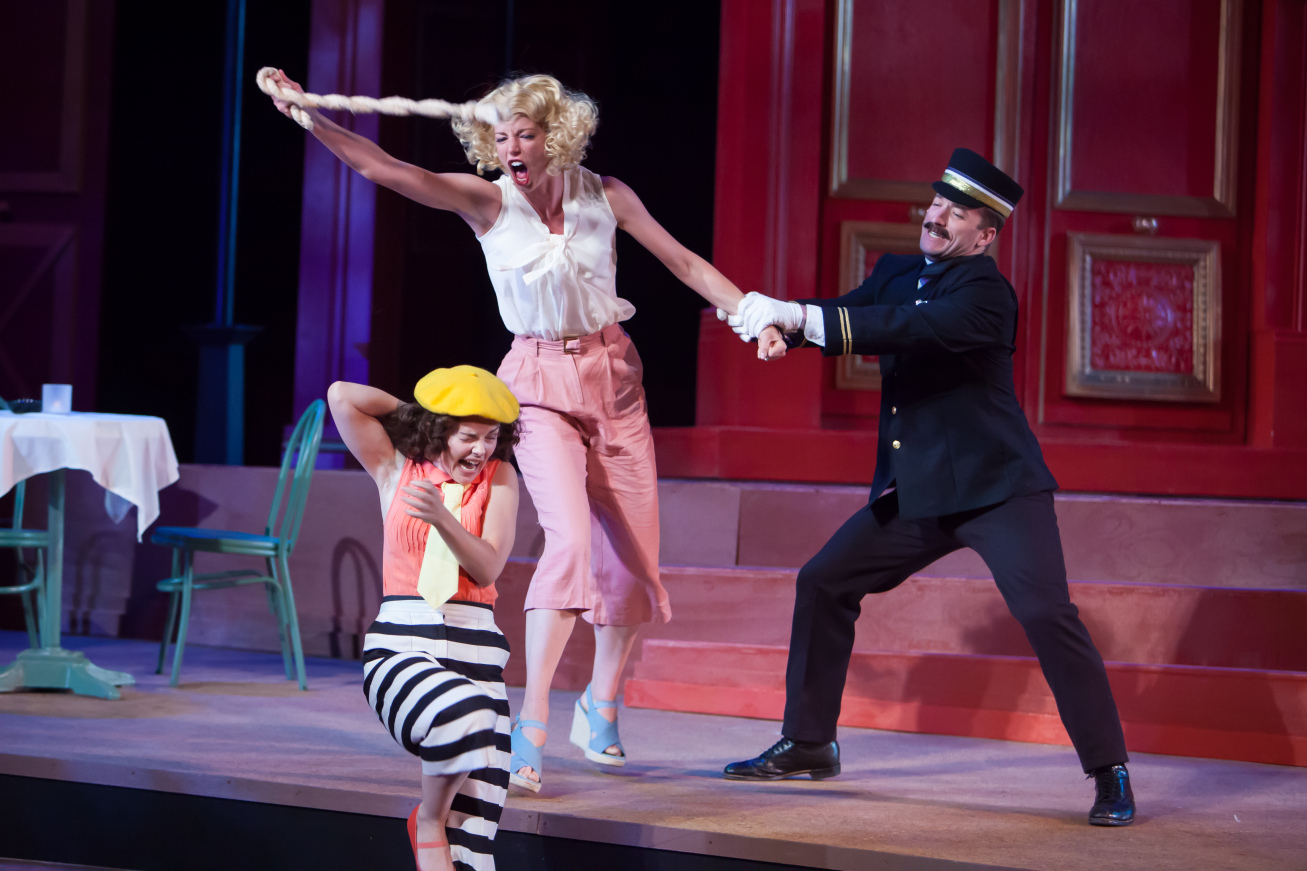 Review: The Comedy of Errors

By Erin Rachel Kaplan for the Glassy Margents (Shakespeare Newsletter)

Opening night of the 2016 Colorado Shakespeare Festival’s The Comedy of Errors was a sight to behold—the audience, sitting under a clear blue Colorado sky, was jittery with excitement and all buzzing about the same question: “they cast the men as women?”

Geoffrey Kent’s production of the play, set joyfully in Paris in the 1930s, did more than merely stage the beloved play; it asked an important question about the role of women on stage and forced the audience to answer a question pertinent to our current cultural milieu—can women be funny—with a resounding, “Yes!”

Kent’s production sought to challenge the audience’s perception of women on stage by reversing the sexes of the main characters: The Dromios become Dromias, the Antipholuses become Antipholas, and the maligned and dejected Adriana and her sister Luciana become the brothers Adriano and Luciano.  Dramaturg Bianca Gordon asks the audience in her program note, “How does the comedy change with women in the roles?  How might this disrupt sexist narratives around women and comedy, and what is gained in the change?”

These questions get at what I believe was the heart of this energetic production.  Normally, it wouldn’t be a woman’s role to be bawdy, loud, exaggerated, and broad—that would be the role of the man, both today and certainly in the late 1500s when Shakespeare penned Comedy.  In most productions, while Antipholis and Dromio are on stage wrenching laughter out of nearly every line, Adriana and Luciana are ensconced at home, sad, dejected, and debating the allegiance a wife has to her husband.  Kent’s production problematized that paradigm and offered a fresh insight into the text and the ability of women performers to be charming, hilarious, raucous—in other words, to break all the rules of feminine convention.

When we first meet Antiphola of Syracuse (the effervescent Carolyn Holding) and her Dromia (the bubbly and animated Lindsey Kyler), the audience is immediately caught off-guard—the pair are hilarious, embracing the absurdities of the text, and taking center stage with prat falls, large comedic gests, and deft physical theatre.  When the second Dromia enters, Dromia of Ephesus (Emelie O’Hara), the audience has the chance to truly see what women can bring to these roles.  O’Hara stole the scene in her retelling of the tale about a raging husband at home awaiting his wife’s return.  For viewers familiar with The Comedy of Errors, the image of a penitent wife waiting for her wayward husband was broken, and instead we were treated to the image of an impatient and irascible husband who cannot come to grips with his wife having a life outside of the home.  This reinterpretation came across as being strikingly feminist.

In the very next scene we meet the brothers, Adriano (Steven Cole Hughes) and Luciano (Christopher Joel Onken).  While Antiphola and Dromia did much of the same work that the original Antipholus and Dromio do in the play with regard to broad comedy and laughs, Hughes and Onken’s Adriano and Luciano deeply change the nature of the text.  In most productions, Adriana and Luciana are rueful, sad, and wholesome, but as male roles, they were made much more broad as Hughes’ Adriano bordered on the ridiculous in his voice, gesture, and manner, all serving to elucidate the insecurity and self-doubt of Antonio. Hughes’ played up this insecurity in his monologue where he questions if his “homely age the alluring beauty took/ From my poor cheek? then she hath wasted it:/ Are my discourses dull? barren my wit?”  Hearing these questions come from a man, whose self-worth is determined by his wife, was a strange, yet refreshing turn and offered space for Luciano’s sage and calming advice to, at least in part, mollify the outlandish anxieties of his brother.

One of the highlights of the performance was the door-knocking scene in which Adriano is at home dining with the wrong Antiphola while his rightful wife and servant are beating at the door trying desperately to get in.  With both Dromias and Antipholia of Ephesus (the hilarious Kelsey Didion) and the Maid (Paige Canepa Olsen) kicking, slamming, and beating on opposite sides of the door, the audience was in stitches.  The physical humor of all four women made this scene stand out as one of the best in the production.  Moreover, seeing the similarity between the two Dromias, one had to commend the casting as well as the fine work of the costume designer (Meghan Anderson Doyle) who had the pair looking nearly identical for the audience.  This scene also allowed the actors to have fun with the truly spectacular set designed by Caitlin Ayer.  The set mimicked that of the original Elizabethan and Jacobean theatres, with doors on both stage right and left, and a larger double door upstage center. The doors were exaggeratedly large, reaching to the tops of some of the nearby trees.

Overall, the production created a space for talented female performers to truly shine with the help of a strong and capable ensemble.  As one of Shakespeare’s earliest and shortest play The Comedy of Errors lacks some of the sophistication and depth of many of the later comedies and can sometimes feel more like a Commedia dell’Arte farce than a polished and rehearsed play.  This production for the most part avoided that pitfall, though there were certainly moments that felt as if they needed just a little more rehearsal time.  On the whole, however, The Colorado Shakespeare Festival’s The Comedy of Errors was a funny, energetic, and entertaining production that Shakespeare lovers of all ages can appreciate.

Feature: A Day in the Life of Geoffrey Kent
Scroll to top