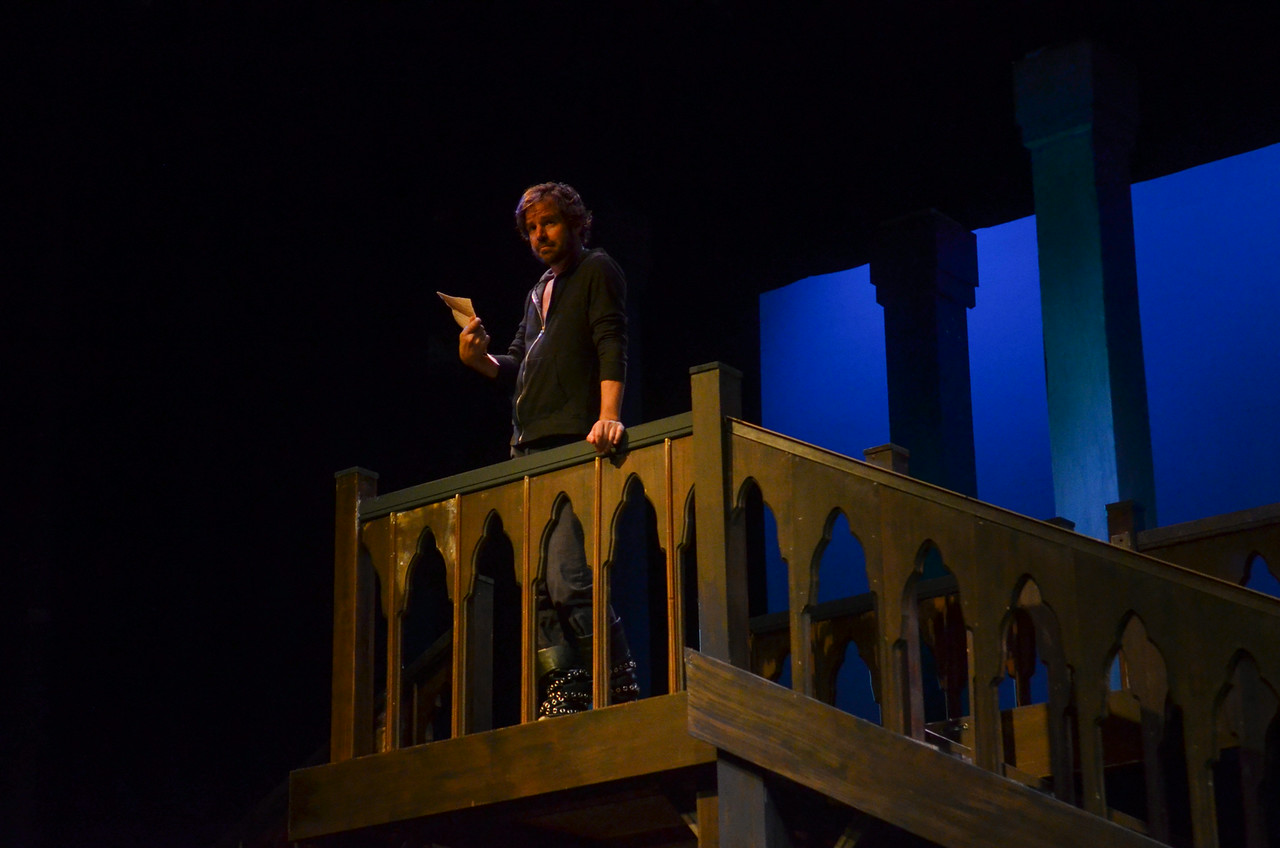 King Henry IV gained the throne by deposing his predecessor, Richard II, and having him murdered, and in Henry IV, Part 1, the crown lies uneasily on his head. He’s beset with political problems: Men who aided his insurgency have turned against him; there’s rebellion brewing throughout the kingdom; and, worst of all, his son, Prince Hal, is a disgrace to the family name, a disreputable layabout who spends his time with whores and a fat, dissolute old knight named Falstaff. Harry Percy, the hot-headed Hotspur leading the charge against him, is an enemy — but he’s also the ideal warrior the king would have wanted as his own son.

One of the wonderful things about this play, now receiving a strong production at the Colorado Shakespeare Festival, is the way it’s structured — the parallels drawn, the echoes and resonances. While Henry is Hal’s blood-and-flesh father, his chosen father appears to be Falstaff, with all his calculating cowardice and intense zest for life. The scene in which Henry berates Hal for the company he keeps is mirrored by another in which Falstaff satirizes the king and lavishly praises himself: “sweet Jack Falstaff, kind Jack Falstaff, true Jack Falstaff, valiant Jack Falstaff.”

The concept of honor provides another — and unlikely — parallel, this one between Hotspur and Falstaff. For Hotspur, honor is a gleaming ideal, something for which he’d lay down his life. Contemplating the carnage of battle, Falstaff has a different take: “What is honor? A word. What is in that word honor? … Air. Who hath it? He that died a’ Wednesday. Doth he feel it? No.” The contrast is brilliantly encapsulated in the image of Falstaff lying on the battlefield faking death near Hotspur’s corpse.

The primary characters are brilliantly drawn, complex, entertaining, and tantalizingly morally ambiguous. Appealing as he is, Hal’s a schemer. Early on, he turns to the audience and explains that he’s only pretending to be a bum so that when he rejects Falstaff and takes on his rightful role as king, he’ll seem doubly virtuous by contrast. And yet he does seem to enjoy his time at the tavern and to feel real warmth toward the old fat knight. You want to love Falstaff, but he’s just as ethically ambiguous. Pocketing the money he’s given to raise a fighting force, he recruits an army of desperate beggars, remarking contemptuously that they’ll do as cannon fodder. Only Hotspur has real integrity, despite the fact that he’s a quarrelsome hothead and has a deep love for violence — and that’s because he’s so purely, honestly and simply himself. Geoffrey Kent comes close to galloping away with the entire production in the role; his Hotspur is tough and quick to anger but also very funny, and both rough and tender with his wife, Kate, portrayed by Jamie Anne Romero in a lovely performance. This woman is gentle and loving, but she can more than stand up to her bull of a husband.

As Hal, Ben Bonenfant provides a strong balance to Kent’s Hotspur. A lightweight, capering imp at the beginning — though showing hints of ruthless determination — he grows into his royal role in front of our eyes. I did have one cavil with this performance: When Hotspur dies at Hal’s sword, it’s a symbolically huge moment, a transfer of power that shakes the heavens a little. I’d have liked to hear Bonenfant deliver the eulogy over Hotspur’s body with a little more power and gravity instead of sounding ready to weep. But that’s a matter of interpretation.

I do have a couple of quibbles with the production. Sometimes the rhythms feel off or a scene seems rushed. The costumes are deliberately anachronistic, with period and contemporary bits and pieces mingling; perhaps this is supposed to make the action seem timeless, but it distracts, and the gold jerkins and helmets worn by the king’s side into battle look flimsy and cheap. These are small criticisms, however, of a well-acted and sometimes inspiring production.

Best Actor in a Shakespeare Play
Scroll to top