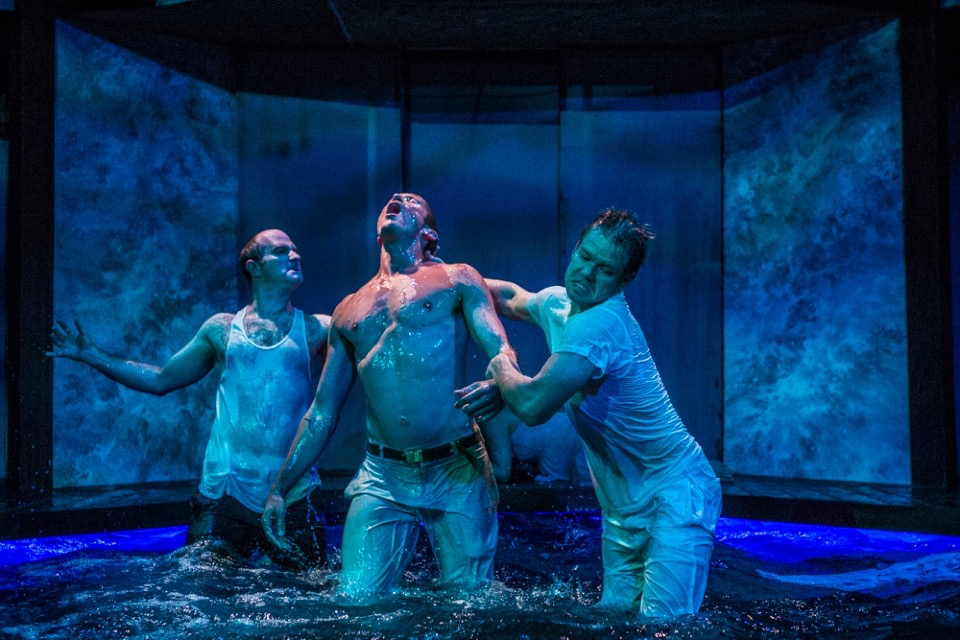 At Saturday’s performance of “Metamorphoses,” the thoughtful folk at the  Aurora Fox provided theatergoers in the first rows with the thin plastic ponchos you might expect passengers on Niagara Falls’ Maid of the Mist to don.

The better to weather the occasional splashes coming from the gorgeous pool that makes up much of the play’s stage in this entrancing production.

Playwright-director  Mary Zimmerman’s award-winning work recounts myths of gods and mortals by way of Ovid and others, including poet Rainer Maria Rilke. The latter provides a telling reimagining of the Eurydice and Orpheus tragedy.

Many of the myths will ring a bell (hey, isn’t that smug One-Percenter with the cocktail Midas?). All are captivating or poignant or amusing.

Geoffrey Kent directs with a keen sense of sensuality (what an adonis that Cyex is) and wit that is quick becoming a trademark of the well-regarded actor-fight director as he helms more productions. Here he’s gathered a very fine cast to do tragedy’s as well as comedy’s bidding.

As Phaeton, Ryan Wuestewald lazes on a flotation mattress complaining about dad Apollo. Justin Walvoord is silly and charming as smitten god of seasons Vertumnus, who spins a yarn in hopes of wooing Pomona (Michelle Hurtubise).

We even feel a pang for Midas (Michael Morgan), who’s sent to wander the Earth in hopes of reversing a wish. What a stunning pose he and his daughter strike after Midas’ request that everything he touches turns to gold comes true.

And there are plenty more wowing instances of physical theater. The tale of lost-at-sea Cyex astonishes when the elements plunge Alcyone’s beloved husband again and again into the roiling waters.

The pool is nestled in the right angle made by two walls. Wooden beams fittingly suggest ancient columns. And from time to time, gods and goddess appear in portals above the action.

Still, it’s the story-telling that plunges us into a realm — ancient and contemporary — where lessons are learned and forgotten and then remembered.

Feature: NY Times “What Creators these Mortals Be”

Review: Taming of the Shrew
Scroll to top