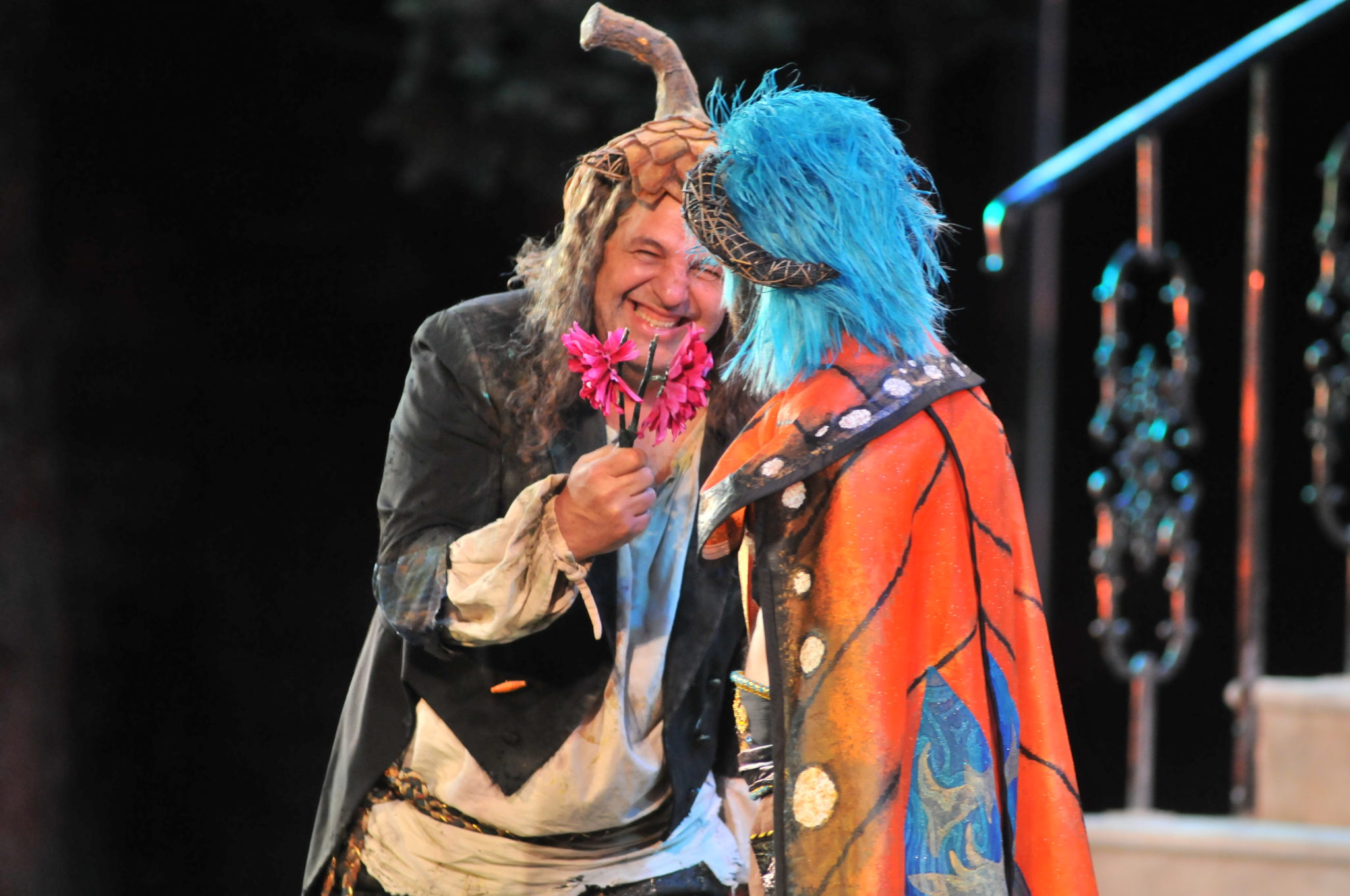 What Creators These Mortals Be

Chances are you’ve either seen it or have been in it. “A Midsummer Night’s Dream” is sort of like the Shakespearean “Godspell” in that sense. And not unsurprisingly, the summer is a particularly vibrant time for productions of the comedy, which works well in an outdoor setting — what with those enchanted fairy-filled woods outside Athens, where lovers’ woes are mystically resolved.

“There is no question there is something deeply magical about sitting in a theater as the sun is setting, and the play is changing with that sunset,” said Charles Fee, whose production of the play will open this summer at the Lake Tahoe Shakespeare Festival in Nevada.

“Midsummer” lends itself to nontraditional treatments, and the art of directorial tinkering is probably almost as old as the script. The Royal Shakespeare Company and Google Creative Lab are teaming up on a part-live, part-Internet production — the epitome of updates — that is but only one of many intriguing interpretations this summer.

Here several of those overseeing these productions talk about their renditions of “Midsummer,” describing how they have conceptualized their productions; what take they’ve chosen for the fairy Puck, that “merry wanderer of the night”; and just what about “Dream”continues to draw our attention.

CONCEPT Set in the Jazz Age, this outdoor production will have a “Downton Abbey” feel. Mr. Kent said this choice makes thematic sense since the 1920s were the era of women’s suffrage, and the play partly deals with a young woman wanting to marry the man of her own choosing, not of her father’s.

PUCK The veteran character actor Lawrence Hecht is an unusual choice for the impish sprite. “He’s a laborious, slow-moving Puck, who’s got a bad back and bad knees and a bad neck,” Mr. Kent said. “He’s a like an aging Teamster fairy who cannot be fired but works at his own pace.”

Mr. Kent has cast Hermia against type too: Jenna Bainbridge is partly paralyzed from the waist down and walks with a decided limp.

POPULARITY “The other comedies are laced with history jokes and jokes on the reign of the current queen,” Mr. Kent said. ” ‘Midsummer’ doesn’t have any of that. You don’t need footnotes to understand why it’s so funny.”

CONCEPT This online version of “Midsummer” will unfold in real time across the weekend. Participants — audience members sounds too passive — can interact with characters (like “Billy Shakespeare,” above left, with “Francis Bacon”) on Google+; create ancillary characters; share thoughts on the play; and engage with the production in other ways. But fear not, traditionalists; “the heart of the play is still the play, and it was important to us to preserve that,” said Geraldine Collinge, director of events and exhibitions for the RSC.

PUCK “He’s the only character that we’re allowing to play across the Internet,” as well as be shown in the more traditional live portion of the production, said Tom Uglow, director of Google Creative Lab (during an interview on Google Hangouts, appropriately enough). Participants will be able to interact with Puck’s online presence.

POPULARITY The play’s still the thing, though given that this is a Royal Shakespeare Company production at heart, the text is still important. “It’s got a mixture of comedy and seriousness, and it does address our times,” Ms. Collinge said. Besides, “In how many plays do people get turned into donkeys?”

CONCEPT This production comes to the United States from Bristol Old Vic in England, in association with the Handspring Puppet Company of South Africa, the same team behind the 2011 Tony Award-winning “War Horse.” Inspired by the setting of Athens, the world’s first democracy, Mr. Morris has set this “Midsummer” in a chaotic, futuristic world, he said, where “there is an impulse through the course of the play toward civilization.”

PUCK Naturally the show features puppets, and Puck is made of wood and metal. “In some ways he’s a Bunraku-style puppet operated by three puppeteers,” Mr. Morris said. Unlike a sprite portrayed by a human actor, this Puck can fly and fall to pieces, Mr. Morris said, adding, “He doesn’t quite have people waiting for him at the stage door, but he’s the character people are talking about after the play.”

POPULARITY “A lot of our lives are based on a theory that when we go to bed on, say, a Wednesday, we wake up on a Thursday, and we are the same person,” Mr. Morris said. “But we know that really we might go to bed on Wednesday in love with one person and wake up Thursday either not in love or in love with someone else. We all recognize that experience.” The play is a “beautiful, wise, crazy articulation of that conundrum.”

CONCEPT Set in Nashville now, this green production features costumes made from recycled materials. The concept is partly inspired by references in Act II, Scene 1, during an argument between Oberon and Titania, the king and queen of the fairies, that today sounds an awful lot like allusions to global warming. As Titania says:

The spring, the summer,

Their wonted liveries; and the mazed world,

By their increase, now knows not which is which.

PUCK He will have horns, but he will also wear a hoodie. “There’s a real negative movement against hipsters lately, and I’m kind of interested in that,” Ms. Hicks said. “What’s wrong with hipsters? They keep our coffee shops running.”

POPULARITY The ferocity of the lovers’ battles still resonates today, and “the humor of the amateur actors as they try to put their play together is still really, really fresh,” Ms. Hicks said. “There’s great advice for life and art within this play.”

CONCEPT “Midsummer” opens with a father angry enough to sentence his daughter to death if she refuses to marry the man of his wishes. “I’ve set it in the Victorian era because that’s an era when female emancipation hadn’t happened,” Mr. Talbot said. “I think it was a sexist world.”

PUCK While the fairy world in the production is dark — like that of the Lost Boys in “Peter Pan” — Puck is still playful and “brings Oberon out of his dark moments,” Mr. Talbot said. “I equate Puck’s relationship with Oberon to the fool in ‘Lear.’ ”

POPULARITY The romance is timeless: “When you get to a certain age, you think back to youthful love, that thrill of the initial feeling of being committed to someone,” he said. “The wallowing about emotion and true love is something that we all enjoy.”

CONCEPT Seven young actors who have been through the theater’s training programs play all the parts in this 90-minute version. The setting is “sort of this side of Napoleonic,” Mr. Croy said. “These are people who could have sprung full-blown from a Jane Austen novel in the way that they express themselves, in the way they seem to feel things, in the way the poetry becomes a metaphor for the size of their feelings.”

PUCK A woman (Annie Considine) plays the role, and four others, in the production. One of the interesting benefits, Mr. Croy said, is “the ways that the different characters reveal things about each other when they come from the same actor.”

POPULARITY “I honestly believe ‘Midsummer’ is the most perfectly constructed comedy ever written,” Mr. Croy said. “Anything that’s similar that seems stale or tired is because of the literally hundreds of years of people stealing from it.”

CONCEPT The 1960s setting includes paisley and leather in the costumes and a Volkswagen Beetle, right, on the outdoor set. Mr. Fee, who is artistic director at the Great Lakes Theater Festival, the Idaho Shakespeare Festival and Lake Tahoe, has employed the concept before, but he said he finds it rewarding to return to familiar ground.

“We begin in 1960s Athens, in a very rigid world,” he said. “It’s a little bit like a magical mystery tour. We go out into the woods, and we have drugs put in our eyes, and we see things completely differently. It’s a bit psychedelic.”

PUCK Expect a bit of Jimi Hendrix. “When I was 10 it was 1968, and I lived in San Francisco, and the fact is, he looks like one of the Merry Pranksters,” Mr. Fee said. “He’s beginning to follow a kind of guru, a sort of maharishi figure in Oberon, but he’s like the guys I saw in the city in the late ‘60s.”

POPULARITY The battles for love connect with audiences, Mr. Fee said, and the play features such a wide spectrum of characters that every attendee is in some way represented on stage. “The poetry is exquisite, and the comedy is low and very, very bawdy,” he said.

Review: The cast of Midsummer features no shortage of standouts