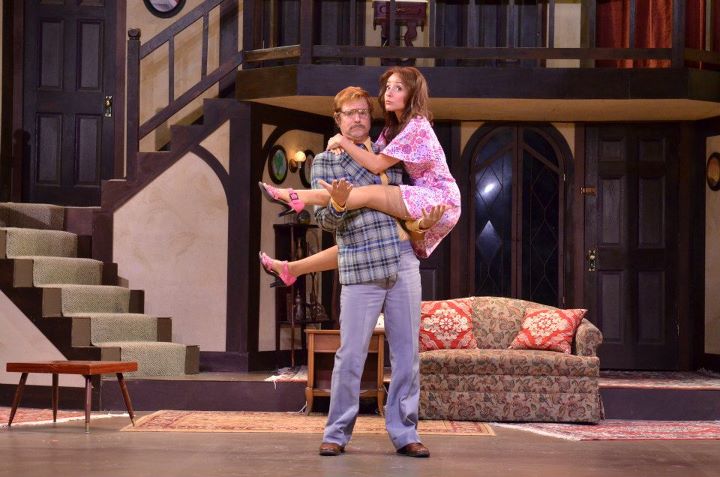 Say it loud: Noises Off is a resounding success

Michael Frayn’s Noises Off is a farce about a farce. It relies on all those familiar farcical conventions — lots of doors with people going in and out of the wrong ones, a woman in her underwear and a man with his pants down around his ankles, sexual innuendo, blows, kisses and slapstick — but in a completely original and intensely clever way, simultaneously sending them up and making use of them. And since no English person can hear the word “sardines” without laughing, there are many plates of the little fishy delicacies on stage.

The structure is the most brilliant part of this brilliant piece of dramaturgy: It shows the same act of Nothing On, one of those fatuous British farces, in three different incarnations. In the first, a group of actors is in final rehearsal for the play, careening toward opening night in a state of radical unpreparedness. The actress playing the maid has trouble remembering how to deal with her props: Does she put down the phone and carry away the sardines, or vice versa? Her employers are out of the country trying to evade their taxes. A man enters, saying he’s a real-estate agent with a client wanting to check the place over, but the client is really his lover — who just happens to work for the British version of the Internal Revenue Service — and they’re looking for a place to snuggle up. Naturally, the homeowners return unexpectedly. Hence the dropped garments and door-slamming. And there’s also a visit from a burglar. Throughout, the director and stage manager race around frantically, trying to get their unruly actors ready for performance.

Much of the humor in this part comes from the tension between theater and life: the actors swerving from being in character to being themselves, the contrast between the supposed script of Nothing On and the off-script dialogue. Garry, who plays the super-suave real-estate agent, is incapable of completing a coherent sentence. Homeowner Frederick is terrified of blood, hyper-sensitive and constantly quizzing the director about subtext and his character’s motivation. Brooke, the salesman’s squeeze, is an oblivious idiot who’ll recite her lines and perform her moves like an automaton no matter what kind of mayhem erupts around her. All of these people have their own love entanglements: Stage manager Poppy loves director Lloyd, who lusts for Brooke; Garry chafes because Dotty, who plays the maid, seems to be flirting with Frederick.

The second act takes place backstage during a matinee; Bruce Bergner’s set pivots ingeniously so that now we’re confronting the back of the act-one room. And where the comedy in that act was highly verbal, most of act two is taken up by an intricate mime ballet, punctuated by muffled exclamations and — as the actors rush on stage to do their bits — fragments of the dialogue we’ve already heard emanating from the gaps in the set. Garry tries to wreak revenge on Frederick and Dotty on him; numerous bunches of flowers get handed to unintended recipients. By the third act, the players are at the end of the tour and thoroughly tired and cranky. They occasionally make a half-hearted attempt to present the play as written, but it keeps falling apart around them. There’s something ghoulishly gleeful about watching these people tromp around on the broken pieces of whatever it was they were trying to accomplish, and something irresistibly funny about the march into sheer unstoppable anarchy.

Under Colorado Shakespeare Festival director Lynne Collins, the actors manage the split-second verbal and physical timing beautifully. As Garry, Geoffrey Kent is called on to hop up a set of stairs with his shoelaces tied together, fall down the same stairs and tumble over half the furniture, and he does it with such aplomb that the entire audience bursts into applause when he finally comes to rest. Leslie O’Carroll is a hoot as Dotty. You can’t help empathizing with Tim McCracken’s Lloyd and Kate Berry’s Poppy as they try desperately to contain the whirlwind. Ian Andersen is a very funny Frederick, and Rachel Fowler fills the role of Belinda, one of those goody-goody types who tries to do everything perfectly…well, perfectly. Jim Hunt has far too much fun as the sottish old actor who plays the burglar, and Jamie Ann Romero is purely and simply delicious as sweetly daft little Brooke.

Review: Colorado Shakespeare Festival’s Noises Off is chock-full of l...

Review: Acting with Abandon in Treasure Island
Scroll to top