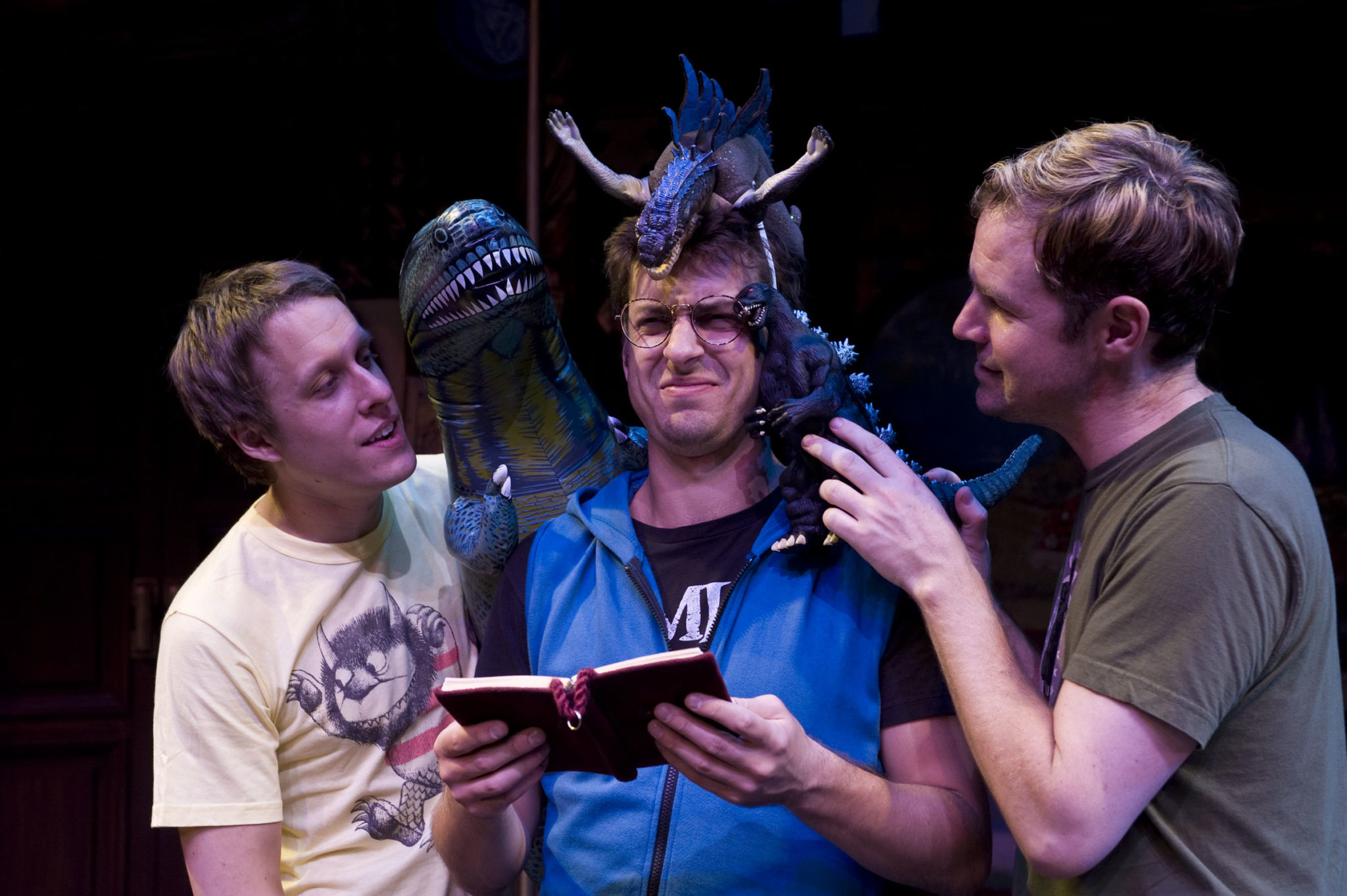 Review: Utah Shakespeare Festival – Othello and Jell-O, this farce has it all

By Barbara Bannon, Special To The Salt Lake Tribune

The most entertaining productions are often a conjunction of happy accidents. When three Shakespeare fanatics — Adam Long, Daniel Singer, and Jess Winfield — decided to concoct a farce from all 37 of the bard’s plays, who would have thought it would be so funny or have such staying power? Then the Utah Shakespearean Festival (USF) decided to scale back its fall schedule in response to the leaner economy. And David Ivers, a man with a fertile imagination to match the mayhem, was available to direct. Finally, three actors with nerve enough to try anything and the comic timing to carry it off — Geoffrey Kent, Quinn Mattfeld, and Matthew Mueller — were cast.

The result is USF’s zany “The Complete Works of William Shakespeare (abridged),” a production whose approach to the bard’s work is “we don’t have to do it justice; we just have to do it.” If you’re a Shakespeare purist, head for the exit; if not, prepare to laugh — hard.

In the effort to cram in everything, hardly a play emerges unscathed. High (or low) points include “Titus Andronicus” as a TV cooking show called “The Gory Gourmet”; “Macbeth,” featuring garish plaid kilts, appalling Scottish accents, and a duel with golf clubs; and all the comedies condensed into one play where everyone is “clueless” and “they all get married in Massachusetts and go out for dinner.” In answer to “Why can’t Shakespeare be more like sports,” the histories are staged as a football game with the crown as the ball: “The quarterback hands off to the hunchback … he’s cutting Henry VI up into three parts; that’s got to hurt.”

But the pièce de résistance is “Hamlet,” performed fast, faster, and — shudder — backwards, producing immortal lines like “be to not or be to” and my favorite, “melt would flesh solid too, too this that oh.” There’s also audience participation, so if you’ve secretly yearned to play Ophelia — or her ego, id, or superego — you’re in luck.

“The Complete Works” has an improvised quality that makes it impossible to determine what is scripted and what the actors are making up as they go along, which suits Ivers and company just fine; they excel at embroidering. They’ve inserted local jokes — “Do you know where I can find a church? About a mile in every direction” — and relish rhyming “Othello” with “green Jell-O.” Watch for a special guest appearance by festival founder Fred Adams.

Ivers keeps the action moving at a pace that makes you fear for the actors’ endurance (their sanity is obviously long gone). It’s hard to decide which of them is silliest. Mueller exuberantly portrays all the heroines with bad wigs and a simpering expression, and Kent delights in taking every opportunity to create more confusion. Mattfeld appears at first to be the straight man but soon is sucked into the accelerating chaos. Their inspired madness is infectious. The only downside on opening night was the backwards “Hamlet,” where you couldn’t catch the words.

Jo Winiarski’s set –a replica of the Adams Theatre — is a collage of memorabilia from previous USF productions. Jennifer Caprio’s eclectic costumes look like leftovers from an Elizabethan rummage sale. And Donna Ruzika’s area lighting becomes an ally in making mischief.

You don’t have to be a Shakespearean expert to enjoy “The Complete Works,” but the more you know, the funnier it gets. “May the bard be with you.”

Bottom line » Shakespeare would probably enjoy the inventiveness and energy of this madcap romp through his entire canon of plays.

Review: Silliness in the CSF’s Much Ado

Review: Santaland Diaries wraps up the holiday in humor
Scroll to top