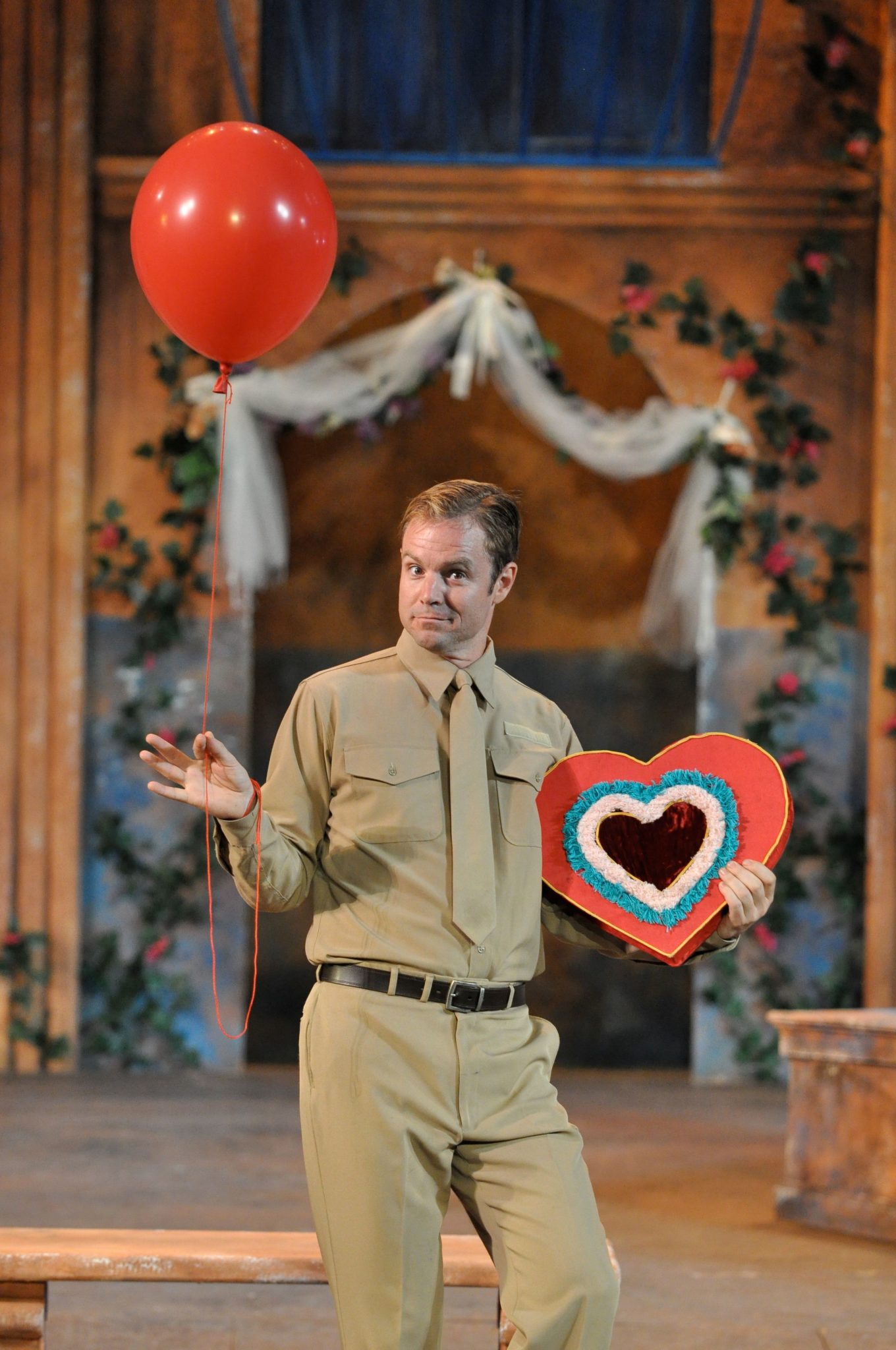 Review: Silliness outweighs substance in the CSF’s Much Ado About Nothing

Much Ado About Nothing is the story of a feuding couple, and that’s where most of its charm lies. Beatrice is one of those wonderful Shakespearean women: tough-minded, principled, smart and funny. She and Benedick are older and more cynical than the usual romantic pair, famed in their circle for trading barbs and their mutual marriage phobia — but everyone agrees that they’re perfect for each other, if they’d just realize it. Their love is mirrored by that of a second couple: pure, sweet Hero and idealistic Claudio, whose love is born of wistful gazes and solitary sighs, and thus very easy for the villainous Don John to derail. When Claudio rejects and shames Hero on what is supposed to be their wedding day, the play tumbles from sunny romance into near tragedy.

Director Lynne Collins has chosen to set the action in 1930s Spain, which gives us a pretty set, interesting costumes and a mix of Spanish guitar music, some of it banal, some evocative. The first half of the production is better than the second, in part because this is when some of the strongest members of the cast have the most to do. Geoffrey Kent is a terrific Benedick, a complete goof but capable of a genuinely moving dignity when required. He’s backed up by Ben Bonenfant — new to the Colorado Shakespeare Festival, and a find — who makes the often cardboard Claudio as real as humanly possible. Steven Patterson, ubiquitous as their commanding officer Don Pedro, is convincing as a tough military guy, but his nutty sense of humor — and even his suppressed feelings for Beatrice — are equally convincing. And Denver Center Theatre Company stalwart Sam Gregory does yeoman’s work in the often stock role of Leonato, Hero’s father and Beatrice’s uncle.

The women aren’t as consistently solid. Where Claudio is fairly strong and rather sweet, Caitlin Wise is directed to do little but simper and giggle as poor Hero (who admittedly doesn’t have a lot to work with in the way of lines). I admire Karen Slack’s strength and humor as Beatrice — she’s the only Beatrice I’ve seen who’s managed to do something new and true with the line about being born under a dancing star — but she blows the pivotal scene in which she and Benedick finally confess their love for each other, and she persuades him to challenge Claudio by ranting at him almost incoherently. Some of these problems are directorial, as shown by the different ways the two gulling scenes are played. The men gang up to persuade Benedick that Beatrice is pining away for him, and the women do the same to Beatrice. As Leonato and friends descant on poor Beatrice’s plight, Kent’s supposedly hidden Benedick does all the requisite surprised mugging, clumsy hiding and falling down. But when the others have left and he’s alone on stage digesting the news, you can see — even though he’s still quipping — how deeply moved he is. By contrast, Beatrice’s attempts to conceal herself as the women play their trick on her is staged in a much clumsier way, and she plays her end-of-scene monologue — which should be as revelatory as Benedick’s — covered with pieces of laundry, Lucille Ball style. What is it with the washing line, a tactic also used in the 2003 CSF production? Are bras and panties supposed to be howlingly funny in and of themselves?

And then the funnymen enter. Dear God, is there any way of making these comic Shakespearean interludes bearable? Not judging from this. Here the linguistically challenged bumpkins are Constable Dogberry and his crew, who, despite their incompetence, actually manage to set right the play’s wrongs. But Collins seems to have concluded that since these scenes are farcical, they should be livened up with lots of physical business and the actual words obscured. She’s even tossed in a bunch of shticky Spanish.

In all, there’s too little focus on poetry in this production and too much emphasis on silly bits. Shakespeare himself had some thoughts on this, which he put in Hamlet’s mouth. “Let those that play your clowns speak no more than is set down for them,” he warns. And overdoing the action, he advises, “though it make the unskillful laugh, cannot but make the judicious grieve, the censure of the which one must in your allowance o’erweigh a whole theatre of others.”

Review: Much Ado About Nothing

Review: Othello and Jell-O, this farce has it all
Scroll to top