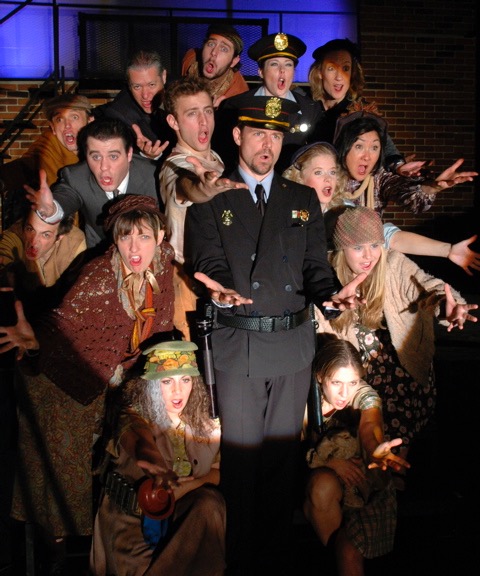 From its unappetizing title to its use of a narrator Lockstock, a police officer who pontificates humorously about exposition, metaphor and politics for the benefit of a quintessentially Dickensian orphan named Little Sally Urinetown is a self-consciously anti-musical musical. The songs are tuneful, varied and appealing, and almost every one parodies a famous number from another show: Fiddler on the Roof, Les Miserables, West Side Story. And when you hear lyrics like Its the oldest story/Masses are oppressed/Faces, clothes and bladders/All distressed/Rich folks get the good life/Poor folks get the woe/In the end/Its nothing you dont know, its clear that the ghost of Brecht is lurking around, too.

Urinetown is set in a city that has suffered a severe drought, resulting in what residents call the Stink Years. Authorities have banned private toilets, and everyone has to fork over money to use the public facilities. Freelance peeing relieving yourself in a jar or finding a sheltering bush is punishable by banishment to Urinetown, a euphemism for summary execution.

The first act takes place outside the filthiest, poorest urinal in the city, Amenity Number Nine, where a line has formed and the fearsome Penelope Pennywise is making sure each jittering client pays his way to relief: Its a privilege to pee, she sings. Her assistant is the handsome, guileless Bobby Strong, and when the beautiful and even more guileless Hope Cladwell appears, she convinces him to follow his heart, in a duet thats both hilariously over-literal and rather lovely. Hopes father is Caldwell B. Cladwell, a tycoon whose corporation, Urine Good Company, controls all the amenities in the city. He scoffs at the plight of the poor, admonishing his compassionate daughter with a catchy tune about rabbit hunting: Dont Be the Bunny.

The concept of public control over private bodily function, the idea that such restriction could spark a popular revolution these are patently absurd. But theres a serious subtext, too, and Urinetowns genius lies in the way it evokes simultaneous giggles and shudders. Drought is a serious issue that has farmers and city people at each others throats right here in Colorado; its also a fact that some large corporations are attempting to privatize water in poor countries. As for peeing and defecation, these activities hit pretty close to home. We all know the fear of not having access to a john when you need one, the pain of intestinal upsets, the core-deep revulsion caused by filthy restrooms. A friend once told me that the most miserable part of his Army basic training was sitting on the commode in the doorless latrine every morning while an ever-lengthening line of men stood before him, cursing his slowness and imploring him to hurry up. He was constipated for weeks.

Producer-director Dan Wiley skillfully exploits this combination of snickers and unease by staging Urinetown in the Denver Department of Public Works Wastewater Management Building. The space is pleasant and odor-free, however, and using platforms, Wiley has created a theater that seats around a hundred people. Its one weakness is acoustic: Although improvements had been made by the time I saw the show, I still lost lyrics and dialogue, and the sound quality marred the casts fine voices and the work of five exuberant musicians. But the venue also cleverly underlines the scripts self-referential quality and keeps the audience alert and amused. People have flocked to this production who would never have made it to the Buell, where Urinetown was last staged in Denver.

Naturally and with a nod to Marc Blitzsteins revolutionary 1937 work, The Cradle Will Rock the poor people of Urinetown prevail over their oppressors. But in the process, like many real-life revolutionaries, they become feral and as murderous as Cladwell, kidnapping poor Hope and threatening to snuff her. Ultimately, their victory is meaningless. As they happily and heedlessly pee and procreate, it rapidly becomes obvious that only Cladwells avarice and water-hoarding had kept environmental catastrophe at bay. Life in Urinetown becomes unsustainable.

Despite the shows upbeat humor, theres a political message here and its a rather nasty one. Should you somehow miss it, Officer Lockstock offers a clue when he suddenly cries out Hail Malthus at the end of the play. Thomas Malthus was a political economist of the late eighteenth/early nineteenth centuries who predicted that humankind would breed itself into extinction if not for periodic, population-decimating catastrophes. He placed the blame for overpopulation on the poor pretty convenient for the rich and his theories were used to justify some rather unsavory political and economic practices. (According to Wikipedia, Charles Dickens had Malthus in mind when he penned Scrooges famous response to the fact that the poor would rather die than go into workhouses: If they would rather die they had better do it, and decrease the surplus population.)

Urinetown authors Greg Kotis and Mark Hollmann create a false dichotomy by implying that the only two social alternatives are corporate repression and popular anarchy. We now know that the best hedge against overpopulation is prosperity. People in wealthy countries where people are well-informed and women control their own destinies barely replace their own numbers (thats what a lot of the worry about Social Security in the U.S. is all about). People in marginal economies are more apt to have child after child.

You dont have to agree with its politics to applaud the audacity of this show and enjoy its alternately ironic and rollicking humor, however. Particularly enjoyable is the duo of Geoffrey Kent, whose Officer Lockstock combines stiff-necked authoritativeness with gyrating physical looseness, and the very talented Genevieve Baer as Little Sally, resisting the temptation to parody a part thats pure parody in itself. Zander Meisner is a strong Bobby, Michelle Merz reveals a fine voice and a lot of poise as Hope, and Jessica Gisin-Mosleys Penelope Pennywise unleashes a surprisingly flowing soprano.

And theres no need to fear intermission: Although Wiley has provided porta-potties for atmosphere, you dont have to use them, and you also wont find very long lines at the restroom.

Best Supporting Actor in a Musical
Scroll to top