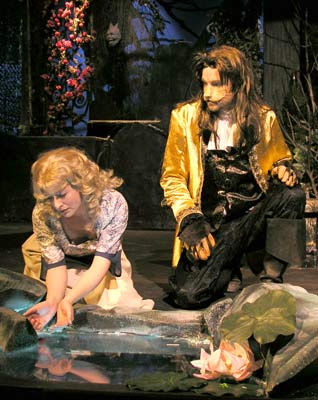 The Nomad Theatre’s Belle and the Beast is the quintessential children’s fairy tale. It’s got all the requisite sweetness and magic; it even brings just a hint of Cinderella to the well-known story of the enchanted prince and the innocent young woman who frees him from his beastly carapace.

The tale begins when a merchant, lost in the forest, stumbles into the enchanted castle where the Beast dwells. He runs afoul of his host by trying to steal a rose, and he is sentenced to death. But the Beast allows him to return home to say goodbye to his family, and his daughter, Belle, finds a way to save his life and take his place at the castle. Of course, she finds a magical helper there. Of course, the surly Beast falls in love with her. And, of course, her own chaste love sets him free. The Nomad script, by Jamie J. Bruss and Christopher Willard, who also directs, adds a pair of sisters, one of them selfish, jealous and manipulative, the other weak-minded and impressionable. The writers have also put their own spin on the helper in the castle; here he’s called Philippe. Jean Cocteau’s famous 1945 film of the fairy tale features a candelabra made of moving human arms. Disney seized on the idea and went it one better: The living household appliances and pieces of furniture featured in both the Disney movie and the stage production became their most successful aspect. Rather than animating the inanimate, however, Bruss and Willard have turned a man to stone. Philippe is stiff, caustic and funny, with a disconcerting and highly amusing habit of petrifying into stillness mid-sentence.

The fantastical stage design is one of the evening’s main strengths. Michael Gorgan has done wonders with the Nomad’s narrow, difficult stage, transforming it into a castle that’s by turns gloomy and warmly inviting, featuring a magic mirror, a translucent pool, a glowing wall of roses and a moving gargoyle head. He’s helped in the process of mood creation by Keith Ewer’s music and Kjersti Webb’s subtle lighting changes. The technical tricks aren’t the loud, flashy, big-money kind; they’re achieved on a small budget, through thought and artistry.

The script is literate, though flatter and less evocative than the technical effects. A few scenes are clunky, and there are no moments of real surprise. Some of the characters lose their integrity over the course of the evening. The Merchant becomes weaker and whinier, Philippe cuddlier and less astringent. On the other hand, the action is skillfully worked out, alternating scenes at the castle and at Belle’s home. Because the latter are visible only when someone at the castle looks through the magic mirror, this means some tricky plotting. There’s a bit of a problem at the end, when the action has to be protracted just a little too long, so that the Beast can shed his beastly garb and become the Prince.

Belle and the Beast features some very strong performances, particularly Geoffrey Kent’s as the Beast. It’s his portrayal, along with the magical set, that really carries the evening. The Beast is a hard role to play without costly technical effects or movie wizardry. In addition, Kent doesn’t have a particularly deep or imposing voice (periodically, his voice is amplified to appropriately threatening effect). Kent doesn’t attempt to fake the Beast’s growly tones; instead, he uses his body. The mask and the long, straggly hair help, but it’s Kent’s physicality — a shambling walk, sideways tilt of the head or droop of a shoulder — that communicates the Beast-man’s rage, anguish and growing gentleness. I was less taken with Irish Jones’s Belle, who seemed a little coy. David Blumenstock is a lively, animated Philippe, and — whether by design or happy accident — his stony makeup and costume perfectly accentuate his sharply defined features and caustic smile. As selfish sister Silene, Megan Meek provides lots of laughs, flouncing around the stage and generally taking advantage of every preening, self-aggrandizing moment. Whenever she appears, the energy of the production shoots up a notch or two. Leslie Randle is very funny as meek sister Leuzia, though this is not a strongly defined character.

Greta Garbo is reputed to have growled “Give me back my Beast” during the transformation scene in Cocteau’s film, and it’s always mildly disappointing when the frightening brute man becomes an ordinary mortal, even if he is a Prince. What will he and Belle do for the rest of their days, one wonders. Ramble the castle grounds holding hands and picking roses?

And as long as I’m quibbling, I’d love to have seen Silene, whose humbling transformation in some ways parallel the Beast’s, paired off with sardonic Philippe. Now, there’s a couple whose after-dinner conversations might be worth listening in on.